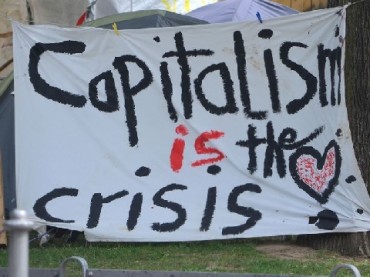 A textbook used for an “activism” class at the University of Michigan teaches that capitalism should be “overthrown” – claiming “capitalism means waste, poverty, ecological degradation, dispossession, inequality, exploitation, imperialism, war and violence.”

The textbook, “Beautiful Trouble: A Toolbox for Revolution,” is assigned as mandatory reading for “Organizational Studies 203: Activism,” a class at the public university that pledges to teach students about the “struggles of movements past, as well as hands-on engagement with the struggles of today.”

The course is unbiased on paper, with its description stating “neither this course, nor its instructional staff, embraces or rejects any ideology, movement, or political project. We will not preach social change from any particular point of view.” But the book blames the “global slump we are living through” on capitalism, adding it “is the predictable manifestation of a crisis-prone economic system rooted in production for profit rather than for human need. … [F]or the sake of human development and ecological sanity it needs to be overthrown.”

It describes capitalism as morally perverse, and defines it as “a profit-driven economic system rooted in inequality, exploitation, dispossession and environmental destruction.”

The course’s claim to nonpartisanship rings hollow to at least one student in the class, who said it does not present both sides of the argument.

“It’s completely biased, and they make no effort to even disguise the fact,” the student told The College Fix. The student asked to remain anonymous over fear of retribution.

“It makes no effort to be balanced,” the student said.

“Beautiful Trouble” is one of two textbooks assigned for the course. The other is “Organizing for Social Change.” While that book does not counter the radical leftism touted in “Beautiful Trouble,” it also doesn’t quite match the blatant leanings of “Trouble,” according to the student.

“Beautiful Trouble” – in its entry on capitalism – states that:

Capitalists are indifferent to the commodities they produce so long as the need to generate profit is fulfilled see THEORY: Commodity fetishism. Solar energy or tar sands oil, cluster bombs or malaria medication, it does not matter what is produced or what purpose it serves, so long as it is profitable. Capitalism in this sense means production for exchange (profit) instead of production for use (human need and ecological sustainability). The moral perversity of this dynamic is played out daily in an economy that produces luxury cars and gourmet pet food for a few, while allowing the reproduction of almost unthinkable levels of global hunger and poverty, with more than one billion people living on less that $1 per day, and another billion and a half on under $2.

Moreover, the book details a hodgepodge of left-leaning activism causes and different, creative ways to take a stand for such beliefs, entries written by a parade of scholars from across the globe who openly profess support for and are engaged in liberal, socialist and communist activism.

The class is taught by Professor Michael Heaney, a political sociologist and assistant professor of organizational studies.

Reached in person during office hours recently and asked about “Organizational Studies 203: Activism” and its assigned reading, Professor Heaney refused to answer any questions presented by The College Fix.

According to the class syllabus, “the working assumption of the course is that the same organizational processes and techniques are useful for a wide range of causes, issues, and ideologies. The goal of the course is to help empower students as citizens so that they might effect change in the world over the course of their lives.”

With that, the class requires each student to complete an “activism” project of the student’s choosing by the end of the term.

One student in the class expressed to The Fix concerns over choosing a conservative-leaning activism project.

“I wouldn’t do it. It would be weird,” the student said. “It’s annoying, they make such a stink about ‘Oh, this is for everyone, we don’t care where you stand.’ Well then why is the textbook so obviously biased?”

Past activism projects have seen students push to make college more affordable, and argue in favor of increasing the minimum wage. The list of projects for this term, The College Fix has learned, includes “Banning Bottled Water on Campus through Student Support,” “A Greener Michigan, One Plastic Bag at a Time,” “Unbiased Fetal Images for People Seeking Abortions,” and “Name New Academic Building after A Woman.”

College Fix reporter Hunter Swogger is a student at the University of Michigan.