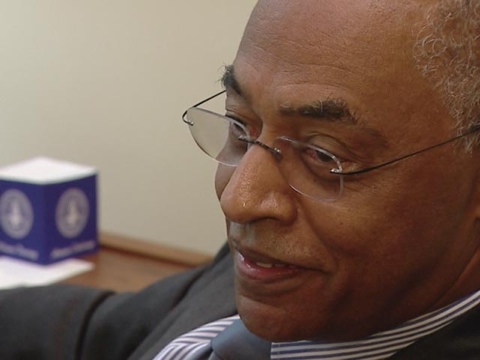 Republican, African-American sociology professor Marvin Scott has felt the need to lead a double life because of his experiences at Butler University.

Many people know Scott for his failed bids as Indiana’s Republican candidate for the Senate and House of Representatives, but those at Butler hardly know him at all or else seem willing to diminish his presence on campus.

“I live a chameleon life. I live one here and I live one for the outside world,” Scott said. “That’s the only way you can survive here.”

Scott said that he counts himself as one of only five Republican faculty members on campus, and noted the stigma attached to his beliefs.

“I guess it’s like someone coming out of the closet,” Scott said. “I came out for what I was all the time: a Republican.”

Scott, an African-American, said he has worked in higher education for 42 years and held many positions including time as the president of historically black Saint Paul’s College in Virginia and vice-chancellor at the Board of Regents of Higher Education for Massachusetts. Scott has taught at Butler for more than two decades in various roles, such as chair of the sociology and criminology department and special assistant to the president.

“I have never run up against such a militant liberal group in all the days of my life,” Scott said.

During his time on campus, Scott said he has faced many incidents of what he identified as “micro insults,” and noted that many leftist faculty members refuse to make eye contact with him.  But some faculty members have acted much more aggressively.

As a prominent Hoosier Republican, Scott said he has kept a photo of himself and former President Bush stashed away in a drawer, but previously displayed it on his desk.

“One of the professors here saw it,” Scott said. “He said, “You don’t know him,” He said, “and that’s a fake picture…” He went running up and down the hall with it.”

But public displays of disrespect are not limited to the faculty.

Scott said Butler president James Danko did not invite him to serve on the newly created Diversity Commission. Danko announced the members of the commission in a campus-wide email in September.

Scott would have seemed an obvious choice for the diversity commission. He almost became the first African-American elected to the Senate from Indiana, fought in the civil rights movement and met Dr. Martin Luther King Jr. as a young student returning from a year of study at the University of Allahabad in India. But Scott’s exclusion may have come as a result of his ideology and not the color of his skin.

Years ago, when a Butler faculty government group considered bringing the celebration of Martin Luther King Jr. Day to campus, Scott said he and another black professor were the only two faculty members to vote against the measure.

“I said no that we should not celebrate Martin Luther King’s birthday,” Scott said. “I said let’s call it Civil Rights Day. I said one of my heroes is John Brown. Thurgood Marshall. I said these are people I’d like to see also honored on that day.”

Marvin Scott is more than a simple contrarian. In order to understand and appreciate his worldview, Scott’s detractors need to understand his past.

“They think that I am not a part of the black mainstream,” Scott said, “so therefore any insult they issue to me will not be felt by the people they are trying to help. Whatever.”

Scott grew up in a poor household, as one of seven children in North Carolina. Three of those children received doctoral degrees, with Scott earning his Doctorate of Philosophy from the University of Pittsburgh.

Along the way, Scott worked two shifts a day, seven days a week in a glass factory. As a family man with four children of whom he is very proud, Scott is a Presbyterian who learned his work ethic from his parents.

Scott said his parents awoke every morning at 5 a.m., and his mother worked as a beautician and his father as an electrician and also as a chauffeur.

When Scott drove 123,000 miles crisscrossing Indiana “virtually by myself,” as the Republican candidate for the Senate opposing the incumbent Democrat Evan Bayh, people were not sure what to make of it.

Many Hoosiers were surprised he came alone and thought that it meant he didn’t have money and couldn’t pull off a successful campaign.

Scott said he wasn’t sanctioned by the GOP establishment and did not receive any money from the Republican Party, but raised $2.5 million and took 37 percent of the vote against the incumbent during his failed 2004 Senate campaign.

The only person who won an election against an incumbent Senator in 2004 was Republican John Thune of South Dakota, the man who followed Scott on stage at the Republican National Convention in Madison Square Garden.

“I was out in the woods somewhere in Indiana and a woman told me, she says, “I’m voting for Evan Bayh because he’s so handsome.” I said, “Well I’m not a damn duck,” Scott said laughing. “You know give me a break. How do you beat someone that’s more handsome than you are?”

Former President George W. Bush appointed Scott to serve on the National Council for the Humanities in 2008. Scott then lost another election in 2010 as the Republican candidate for Indiana’s 7th Congressional District, which includes the city of Indianapolis in Marion County.

“To get blacks to vote for me in Marion County would be like me trying to win the Powerball—it’s just not going to happen,” Scott said.

Scott said that while he has no plans to run for office in the future, “you never know.” No one has beat a path to his doorstep asking him to run again, he said, but if they do they’ll need to bring money because he thinks it’s a rich man’s game now.

“History will only remember me as the person who ran and almost won, but never won,” Scott said.

Many Butler alumni remember Scott as a favorite teacher, and he proudly showed letters he has received each year from alumni. Scott said he loves teaching.

But exactly how many students get to meet Scott may depend upon the actions of faculty members who willfully neglect him at every turn.

“Wouldn’t you think you had someone who has run for Senate, run for the House of Representatives, wouldn’t you be beating the damn door down to have me come down and at least say something?” Scott said. “That’s the whole issue right there.”

And Scott’s not the only one who has faced such treatment from Butler. In 2010, World Magazine reported that Butler “had a shot at landing U.S. Chief Justice John Roberts as a commencement speaker but voted it down.”

Economics professor Bill Rieber told the magazine that the Faculty Senate missed the opportunity to engage the Chief Justice of the Supreme Court of the United States because it had concerns about bringing too many “right-wingers” to campus.

“This was an ideological vote,” Rieber said. “One person said Roberts was not in favor of a woman’s right to choose.”

Scott said he generally does not spend time worrying about the people who neglect to include him because of his opinions, but he did speculate about their motivation.

Scott said he would turn 70 in March.

“I’m never going to be respected as an academician because half these people don’t know what I do or give a damn what I’ve done. Got it?” Scott said.

Being ostracized eventually led Scott to live a kind of double life–quiet about his political beliefs on campus, while remaining vocal about them elsewhere. Nevertheless, the opposition of leftist academics will not change him, he said.

In a forthcoming book, Scott plans to open up about his experiences as a African-American conservative entrenched in the liberal world of academia.

Scott is ready to speak out publicly about his experiences because he is close to retirement and plans to name names in his book.

“They can sue me later, but you know I’m going to say what I have to say.”

Fix contributor Ryan Lovelace is a senior at Butler University.