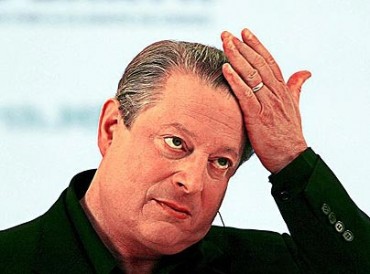 Turns out Gore wasn’t much of a science student in college. According to his Harvard transcript, he earned a D in natural science his sophomore year. He followed that up with a C+ in another natural science course his senior year.

We can see why his grades weren’t so hot. When it comes to the environment, Gore seems to be fueled by emotion rather than reason.

Recently, during a speech at Hampshire college, Gore dismissed the idea that natural phenomena such as sun spots and volcanoes cause climate change. ”That’s not true. It’s an urgent problem that requires urgent attention and must be addressed,” he told students.

Last year during a speech at the Aspen Institute Gore got even more heated on this topic: ‘They pay pseudo-scientists to pretend to be scientists to put out the message: ‘This climate thing, it’s nonsense. Man-made CO2 doesn’t trap heat. It may be volcanoes.’ Bullshit! ‘It may be sun spots.’ Bullshit! ‘It’s not getting warmer.’ Bullshit!”

Some actual scientists disagree with the former VP.

UC Boulder climatologists released a study a few years ago, claiming that as much of a third of the mean temperature rise since the 1960s could be the result of reduced volcanic dust in the atmosphere. Their finding was somewhat controversial.

But the idea that sunspots play a big role in shaping the earth’s weather patterns is widely accepted by scientists, and certainly isn’t “Bullshit”–no matter what Al Gore may say to the contrary. The connection between sunspots and earth temperature, is well-established, even if scientists disagree on the role of sunspots in long-term warming trends.

During the period from 1645 to 1715, the Sun entered a period of low activity now known as the Maunder Minimum, when through several 11- year periods the Sun displayed few if any sunspots. Models of the Sun’s irradiance suggest that the solar energy input to the Earth decreased during that time and that this change in solar activity could explain the low temperatures recorded in Europe during the Little Ice Age.

Al Gore has made a great post-political career for himself playing the role of climate alarmist. Millions of dollars, a Grammy, and a Nobel Peace Prize later, he still evinces an urge to avoid intelligent discussion of climate science in favor of promoting himself, his books, and his movies. He never lets evidence get in the way of his agenda.

That’s probably the same kind of non-serious thinking that got him those low grades in college.