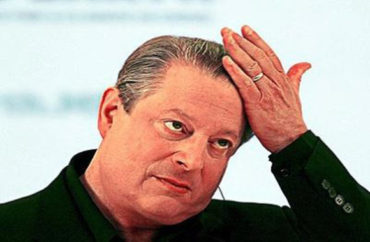 Long gone are the days when college commencement speakers merely offer words of encouragement to those about to embark on their journey to the real world.

Now, especially with that dastardly Donald Trump in the White House, speakers must denounce this evil incarnate … nay, this threat to very fabric of the universe!

At Yale, Hillary Clinton told graduates to “work to combat ‘a full-fledged crisis’ in the United States’ democracy,” and “joked” about Russian meddling in the 2016 election by saying “If you can’t beat ’em, join ’em!” She then donned a Russian hat.

Demonstrating zero self awareness, Clinton complained “The radicalisation of American politics hasn’t been symmetrical. There are leaders who blatantly incite people with hateful rhetoric. Waging a war on the rule of law and a free press, de-legitimizing elections, perpetrating shameless corruption, and rejecting the idea that our leaders should be public servants undermines our national unity.”

But then there was former vice president Al Gore who, like Clinton, can’t get over the fact that he lost a presidential election.

[Gore] urged the graduates to vote in large numbers in the coming years, suggesting that America’s “experiment” with the Trump administration should, like some scientific ventures, “be terminated early for ethical reasons.”

More from The Sun:

The Democrat who served with President Bill Clinton urged the audience of early 20-somethings to prove wrong the statistics showing their demographic votes in smaller numbers than older citizens.

“What if, in this year and the years immediately following, something truly extraordinary happened?” Gore said. He said he hoped to see “an American youth movement” that will vote in “unprecedented numbers and reclaim the integrity of American democracy.”

On global warming, a topic he helped raise in public consciousness through the documentary “An Inconvenient Truth,” he pointed to hurricanes that flooded Texas and Louisiana and destroyed much of Puerto Rico last year, criticizing the Trump administration for not doing more to help Puerto Ricans in particular. Students cheered as he called on society to act more quickly to combat climate change.

“We fail to measure the full consequences of the choices we make,” he said. “We have to reclaim our own destiny by measuring what really matters to our future, starting with a decision to reduce the global warming pollution.”

Thankfully, reaction to the speech was mixed:

“I loved the shade at Trump,” said Alexis Hickson, a 22-year-old from Yorktown, N.Y.

But 24-year-old Niko Fedkin said while he appreciated the encouragement, and even the push for increased voter turnout, he didn’t think the rhetoric about democracy being at risk was fair.

“It’s up to who you ask,” the Pennsylvania native said. “I think he went a little bit far.”