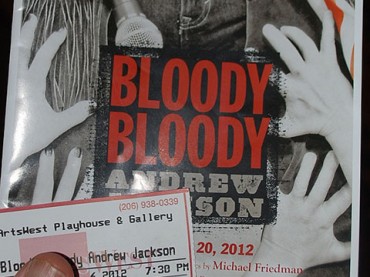 “Were this not an academic setting, I personally would have made the decision to go on with the show, but on a university campus our obligations are different. I don’t think it’s fair for us to alienate members of the community.”

This may be the most telling quote in the Stanford Daily‘s story about why a student director canceled her intended presentation of Bloody Bloody Andrew Jackson, a Broadway musical about the president controversial for “its representation of Native Americans” and “satire of serious issues.”

It sounds like nothing more than a South Park episode, or indeed any production by Trey Parker and Matt Stone (Team America, The Book of Mormon).

American Indian activists at Stanford, in a bid to convince director Benina Stern to make alterations to the script, nitpicked the production until she killed it entirely:

Stern said that the [Stanford American Indian Organization] students brought up criticisms of the musical with which she was mostly familiar, having researched previous critiques in the hope of using the musical to create a positive dialogue on campus.

“I don’t do theater just to say we put on a show, I do theater to have a conversation and to learn,” Stern said. “I wouldn’t have pitched this show if I didn’t think something could be said about it and problems brought to light that a lot of the Stanford community does not think about.” …

Stern and her team proposed a variety of potential solutions to ensure that a positive dialogue came out of the show, including cutting certain songs and making small script changes, or finding a show written by a Native American author to be funded by ATF and put on in conjunction with “Bloody Bloody Andrew Jackson.”

After a month of meetings, which included Stern, the co-producers, SAIO, [At The Fountain Theatricals] and various faculty moderators, it became clear that the problems of representation in “Bloody Bloody Andrew Jackson” could not be fixed.

The activists also threatened protests by both campus and Bay Area American Indian groups, threatening the future careers of the actors.

In response, Stern and her partner created an original play, Did We Offend You? – “a cabaret show that featured controversial songs in musical theater, including songs from ‘Bloody Bloody Andrew Jackson,’ ‘Rent,’ ‘The Producers’ and ‘The Book of Mormon'” – in four weeks from creation to rehearsal.

Somehow that mollified the activists, who apparently missed the point.

And now there’s blowback in the form of a “student-produced email newsletter” that accused the activists of censorship:

[SAIO co-chair Dahlton] Brown said … he is also concerned about the negative effect the Fountain Hopper’s article may have on the perception of SAIO on campus, since SAIO is a special fees group and their funding must be approved by the student body.

“We don’t want to be defunded because people think we’re these censoring radicals,” Brown said.