At the University of Wisconsin-Madison, a course titled “The American Presidency” comes with more than a basic rundown of the responsibilities and powers of the presidency. At least while Donald Trump holds office.

In his syllabus, Professor Kenneth Mayer lets his students know where he stands on Trump.

“We are 2 years into the most (how shall we put it?) unconventional presidency in American history, with a president who gleefully flouts the norms of governing and presidential behavior that have structured the office since George Washington,” the professor states at the beginning of his 10-page syllabus, a copy of which was obtained by The College Fix.

“To his supporters, this is not a bug, but a feature, and they rejoice in his contempt for what they insist is a corrupt D.C. establishment. If elites are against it, Trump’s supporters are for it,” the syllabus for the course adds.

The political science professor then explains how he thinks everyone else sees the president: “To others, he is a spectacularly unqualified and catastrophically unfit egomaniac who poses an overt threat to the Republic.” 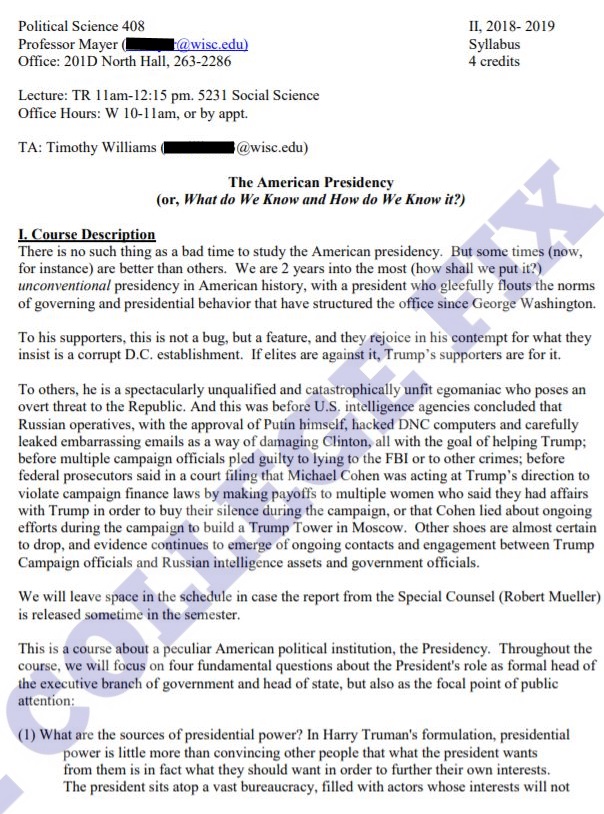 Mayer goes on to cite recent political controversies, stating Vladimir Putin hacked the DNC to help Trump, Michael Cohen acted at Trump’s direction to violate campaign finance laws by making payoffs to women who allegedly had affairs with Trump, and Cohen lied about Moscow real estate dealings, among other accusations.

Mayer motions more is coming, writing that other “shoes are almost certain to drop, and evidence continues to emerge of ongoing contacts and engagement between Trump Campaign officials and Russian intelligence assets and government officials.”

The professor lets students know he left room in the schedule “in case the report from the Special Counsel (Robert Mueller) is released sometime in the semester.”

The syllabus was provided to The College Fix by McKenna Collins, a student in the class, who said she is disappointed by its bias.

“His one-sided, lengthy articulation of the anti-Trump position in the syllabus stands in stark contrast to the feeble, effortless explanation he offers for the pro-Trump position,” she said in an email interview with The College Fix. “His choice of language serves only to set a negative, partisan tone about the subject matter before students even set foot in the classroom.”

“The professor’s implicit bias against Trump supporters has robbed students of the opportunity to think objectively about the subject matter and formulate their own opinions.”

Mayer did not respond to The College Fix’s emailed request for comment on the syllabus.

In a statement to The College Fix, UW-Madison spokesperson Meredith McGlone said “Ken Mayer is a popular instructor and award-winning presidential scholar who leaves his political opinions at the classroom door and asks his students to do the same.”

“At a time of perhaps unprecedented political polarization, he balances the readings for this class to represent both conservative and liberal views and encourages students to draw their own conclusions based on evidence and thoughtful debate.”

The class will cover, according to the syllabus, the sources of presidential power, presidential governance, and elections, the latter of which will include special attention to the 2016 election, as “Russia was actively involved in using social media and other strategies to influence the outcome.”

“And, finally, we must consider the question of how presidencies end (or are ended). Two presidents have been impeached but not convicted (Andrew Jackson and Bill Clinton), and one forced from office (Richard Nixon),” the syllabus states. “Impeachment is an extraordinary remedy. Are we in that territory?”

Required readings for the class, according to the syllabus, include reading a national newspaper of record, with the The New York Times and the Washington Post cited by name. Other readings include various books addressing presidential power and political systems, as well as “To End a Presidency: The Power of Impeachment” by Laurence Tribe and Joshua Matz.

A section on “The President and the Public and the Media” assigns study on “the rise of the ‘public presidency’” and cites some examples, such as an FDR fireside chat, Ronald Reagan’s July 1981 tax speech, and Donald Trump’s Twitter feed.

It’s clear Mayer’s special focus of the class is Trump.

Other assigned readings, according to the syllabus, offer titles such as “Hostile Sexism, Racism Denial, and the Historic Education Gap in Support for Trump,” “Understanding Trump’s Voters: How He Pulled it Off and What Lies Ahead,” “How Rural Resentment Helps Explain the Surprising Victory of Donald Trump,” “How Trump Won” and “What Trump Got Right About American Democracy.”

Collins, in her interview with The College Fix, said that the “language expressed by Professor Mayer in his syllabus does not reflect a commitment to a pluralistic society. Rather, his statements reflect an implicit, singular bias that intimidates and ostracizes conservative students taking this course.”