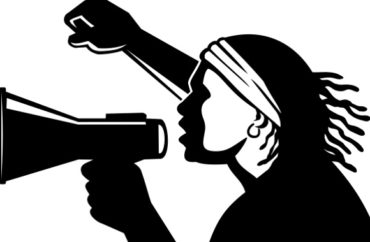 Roughly a week after the Amherst College Police Department said it would not cede to student demands to disarm, students walked out of class to demand the department’s abolition … and to protest the killing of Daunte Wright in Minnesota.

“Hundreds of students,” all donned in black, joined the protest. The event was organized by the Black Student Union, The Amherst Student reports.

Wright allegedly was shot dead when, after resisting arrest and attempting to flee in his car, a police officer used her gun instead of her taser. In audio of the encounter, the officer in question can be heard yelling “Taser! Taser! Taser!” but then exclaims “Holy sh**! I shot him!” upon realizing she had used her gun.

Black Student Union (BSU) President Ayodele Lewis told walkout participants “We can’t be expected to attend class any longer as our brothers and sisters are slaughtered in the streets by designated state violence across the country, across the globe.” (During the virtual town hall at which the campus police refused to disarm, Lewis questioned whether there’s any difference for students of color between police officers and so-called Community Service Officers … as she had once been “approached aggressively” by the latter.)

Council of Amherst College Student-Athletes of Color President Bella Edo claimed Wright was shot and killed “for no reason other than his Blackness.” She said “We live every day with anger and devastation. Our own people being killed while negotiating with the fear that we might be next.”

The Association of Amherst Students, which previously called for the ACPD to disarm, demanded the department’s dismantlement via an “expedited” resolution vote on Tuesday morning.

First, we have an obligation to listen to and stand behind Black students. Second, nothing [Chief of Police and Director of Public Safety] said [at the Town Hall] was sufficient justification for a police department at Amherst […] based on the available evidence, [ACPD] does not need to be a full-fledged, 24-person police department with armed, sworn officers — which nationally serve as a source of violence against Black — and all people.

Amherst professors got involved as well. Rafeeq Hasan (philosophy) and Jill Miller (biology) both excused students from their classes, while Ashley Carter (physics) wrote to her students that she was taking time to “reflect on policing and systematic racism” in the US.”