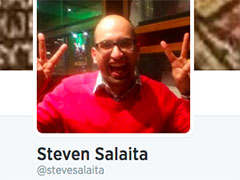 For those of us wondering what level of anti-Israel hysteria could get a professor in trouble with his institution, now we have an answer.

Steven Salaita, whom College Fix readers might remember as the Virginia Tech professor who publicly argued against the phrase “Support Our Troops,” apparently lost his job offer from the University of Illinois at Urbana-Champaign because of his tweeting, Inside Higher Ed reports this morning:

The sources familiar with the university’s decision say that concern grew over the tone of his comments on Twitter about Israel’s policies in Gaza. While many academics at Illinois and elsewhere are deeply critical of Israel, Salaita’s tweets have struck some as crossing a line into uncivil behavior.

Here’s a sampling of his tweets, which abruptly ended after Saturday:

“At this point, if Netanyahu appeared on TV with a necklace made from the teeth of Palestinian children, would anybody be surprised? #Gaza.” … “Zionists, take responsibility: if your dream of an ethnocratic Israel is worth the murder of children, just fucking own it already.”

Salaita’s appointment had already been made public and he had resigned from Virginia Tech, but he hadn’t been approved by the UI board of trustees.

UI was well aware of his Twitter activity and previously defended him – Inside Higher Ed notes that “as recently as two weeks ago, the university confirmed to reporters that he was coming.” The News-Gazette on July 22 quoted a university spokeswoman who said regarding Salaita’s tweets, “Faculty have a wide range of scholarly and political views, and we recognize the freedom-of-speech rights of all of our employees.”

But even one of Salaiti’s colleagues-to-be at UI said the school made the right call. Cary Nelson, a past president of the American Association of University Professors, told Inside Higher Ed:

“I know of no other senior faculty member tweeting such venomous statements — and certainly not in such an obsessively driven way. There are scores of over-the-top Salaita tweets. I also do not know of another search committee that had to confront a case where the subject matter of academic publications overlaps with a loathsome and foul-mouthed presence in social media. … Salaita’s extremist and uncivil views stand alone. There is nothing ‘unpopular’ on this campus about hostility to Israel.”

In other words, because Salaita is spewing venom in easily read social media rather than obscure academic journals, he’s too hot to touch.

Read the full Inside Higher Ed article here, which notes the school isn’t confirming “the blocked appointment” or how often appointments at this stage fall through.