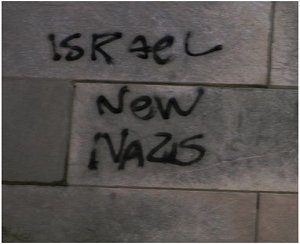 Last weekend The Fix reported on how over 500 University of California alumni joined over twenty organizations in requesting that UC President Janet Napolitano to “adopt a number of measures to rein in antisemitic acts against students.”

One of these is utilizing the US State Department definition of “anti-Semitism” which includes, among other things, “demonization or delegitimization of Israel along with a more religious or ethnic prejudice or hatred directed against Jews.”

The concern is a valid one; of anti-religious hate crimes in the United States, the vast majority are anti-Jewish, easily outpacing anti-Muslim incidents (even in 2001, the year of the 9/11 attacks) despite the latter garnering more mainstream media coverage.

What is potentially problematic with UC taking on the State Department meaning of the term is this: “train[ing] campus staff and authorities to ‘identify anti-Semitic behavior, and direct them to develop clear protocols for addressing campus antisemitism with the same promptness and vigor as they do other forms of racial, ethnic, and gender bigotry and discrimination.’”

Considering the “promptness and vigor” with which too many colleges address (seemingly) racist, sexist and homophobic incidents on their campuses, do we now similarly want to stifle — and intimidate — free speech based on its potential of being  anti-Semitic?

As The Fix’s Greg Piper noted back on the 26th, the Foundation for Individual Rights in Education’s (FIRE) Will Creeley says

If these examples are turned into enforceable restrictions on free speech, certain criticisms of the Jewish faith or of Israel would be grounds for punishment, a viewpoint-based restriction on expression that cannot be squared with freedom of expression. That these criticisms may be bigoted or even false does not mean they may be silenced or punished by government action.

This is a very legitimate concern, needless to say.

Nevertheless, it’s apparent the request made of Napolitano comes because many people are simply fed up with the ridiculous double standards at play when it comes to Jewish students and (criticism of) Israeli policies.

Take Salon’s David Palumbo-Liu. In his article he quotes UC English Professor David Lloyd, who complains of “intent[s] on blacklisting faculty critical of Israel.” (Lloyd also happens to be a bigwig in the BDS movement.)

Their criticism of the course is typical, both in its stridency and in its ignorance. They assume, simply because the leader of the course is president of Students for Justice in Palestine (SJP), that it will be “propaganda.” But the syllabus contains a broad range of views, Palestinian, Jewish, Jewish Israeli and Palestinian Israeli. It has readings from Edward Said, Saree Makdisi and Rashid Khalidi, all widely respected scholars; it also has readings by Benny Morris, Israeli historian and Zionist, David Grossman, the liberal Israeli writer, Neve Gordon, an Israeli political scientist who is critical of Israel’s occupation, and Uri Ram, an Israeli sociologist. Setting Benny Morris alongside Palestinian journalist Ali Abunimah allows students to consider very different ideas of possible solutions to the occupation, while reading a broad spectrum of Israeli opinion allows students to see that criticism of Israel is by no means the same thing as anti-Semitism: it is possible to be an Israeli anti-Zionist, or an Israeli Zionist who is opposed to the occupation. To suggest that criticism of Israel is identical with anti-Semitism is not only absurd, but also implicitly racist, since it pretends that all Jews must uniformly identify with that particular state.

Lloyd is speaking of a one-credit course at UC-Riverside taught by an undergraduate “who just happens to be the president of the UC Riverside chapter of Students for Justice in Palestine.”

You can view the course curriculum and decide for yourself whether Professor Lloyd is delusional when he says the course “contains a broad range of views.”

Nearly every text presents Israel as an “occupying” power and deems it morally repugnant and guilty of “settler-colonialism.” No other competing interpretations, arguments, or views are presented through the readings over the course of the semester.

The course evidences a complete lack of historical information about the “Palestine-Israel conflict.” Despite the stated learning objective, “develop a historical understanding of the conflict in the Middle East,” the course material fails to offer a single work of history that even relates historical events in a chronological format.

A majority of the texts actively promote a particular political position vis-à-vis the “Palestine-Israel conflict,” specifically the dissolution of the State of Israel and its replacement with a unitary “democratic” state composed of Arabs and non-Arabs …

This would be a textbook (pardon the pun) example of the “demonization or delegitimization of Israel” in the State Department definition of anti-Semitism. What else would you call readings that promote the “the dissolution of the State of Israel”? What about the lack of historical context behind the “occupation” of the West Bank and (formerly) Gaza — aspects like, say, the Six-Day War? Where’s the mention that it wasn’t the nascent Israel which gobbled up the land set aside for Palestinians in the war shortly after the 1948 Partition Plan … but the surrounding Arab states? Where was the Palestinian state from 1948 through 1967?

To put it another way, it clearly isn’t exclusively Israel which is to blame for the continuing plight of the Palestinians.

Should such a course even be offered? If you appreciate (academic) freedom you’d say, “Sure.”

Perhaps UC-Irvine Professor Gary Fouse (to whom the hat tip goes for several of the links in this post) puts it most succinctly (via the comments at the Salon article):

I have regularly attended the annual anti-Israel events on campus and listened to the speakers. I have never challenged their right to speak and no, I don’t think that being critical of Israel makes one an anti-Semite. I do question why Israel is being singled out given the horrors going on in the neighboring countries.

Which goes to the heart of the BDS movement, on campuses and elsewhere: Why single out Israel for boycotts?

A big reason is progressivism. This is what so-called progressives do — they take up the cause of the “underdog,” the “oppressed,” no matter the factual circumstances. They require someone/something to “care for.”

One would think that one of the most oppressed peoples of all time — Jews — would be revered by progressives. But Jews have made, and continue to make, the “big mistake” — they’ve dare(d), over the centuries, to overcome their oppression, discrimination … and even attempted extermination.

In Israel they’ve turned a desert into an incredibly successful nation, and fortuitously warded off several attempts to obliterate them.

If that sounds “progressively” hypocritical, the entire BDS movement itself is awash in hypocrisy. Again, why single out Israel for boycotts? What about the Palestinians,’ and other Arab nations,’ treatment of religious minorities, homosexuals, and women? I thought progressives cared deeply about such groups.

Salon’s Palumbo-Liu isn’t much better as he unwittingly exposes the duplicity of the academy:

The call for the end of the vicious Israeli occupation is today a kind of litmus test for progressives, because you have sacrificed so much. There is no doubt that you will be called an anti-Semite, that you will be called a chauvinist; there is no doubt you will be called someone who is downplaying the history of oppression of Jews … [And yet] one can no longer say one is a serious progressive, let alone committed to moral integrity, without lifting one’s voice to call for an end to the Occupation of the Palestinian people. We have got to make that more and more a central part of our action.

Now, take his second sentence and replace a few terms: