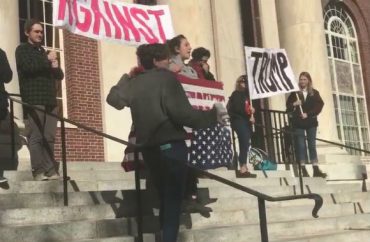 ‘Employing the same tactics that lost the election’

Wesleyan University students honored America’s veterans Friday by defacing the American flag rather than burning it.

It’s at least the third school this week where students upset over the election of Republican Donald Trump have taken out their frustration on the flag, joining American University and Hampshire College.

A Trump supporter at Wesleyan who was harassed by protesters told The College Fix that she defended their right to deface the flag on Veterans Day, but said it would set back their anti-Trump cause.

As Wesleyan protesters marched from one side of the campus to another on Friday, Yael Horowitz and Abby Cunniff stopped to make a visual protest, The Wesleyan Argus reported.

One held up a large American flag, while the other pulled out a can of spray paint and sprayed “AmeriKKKa” on it.

Cuniff told the Argus they sprayed that message on the flag to “symbolize the prominence of white supremacy in the United States” represented by Trump’s victory.

The two students were initially planning to burn the flag, they told the crowd, but “chose not to burn the flag out of respect for Veterans Day,” according to the Argus.

Flag burning was scrapped in favor of spray painting an American flag pic.twitter.com/s7JA3dHhbU

The vilification of America for its treatment of racial minorities was a recurring theme at the protest.

Student Michael Ortiz said the protest was specifically directed toward those who are not white, telling the applauding crowd: “The centerpoint of your activism should be to work for those who cannot work for themselves.”

Professors and staff were present as well, and an unidentified alumna from the class of 1978 joined them to say that Trump’s election “is how fascism starts. Not my president.”

Administrators across the nation have responding to students’ emotional distress over Trump’s victory by giving them puppies to play with and hosting safe spaces. Some students have staged mass walkouts from class.

A campus watch party at Wesleyan devolved into hysteria when Trump’s victory became clear. One student told the Argus “we were all just crying, we were all just sobbing together” in the TV lounge.

‘Dogmatic name-calling did not work on Tuesday’

Wesleyan has at least one Trump supporter, however, with student Sophia Fox telling the Argus that Trump’s victory “feels like heroin to me.”

Wearing Trump’s trademark “Make America Great Again” cap, Fox had been “chased away” from a group of protesters at the Friday protest, according to video by Jake Lahut, features editor of the Argus.

Fox told The Fix that while she does “support the defacing of the flag as an expression of free speech,” she hopes that “the two girls responsible for this act realize how dishonorable their actions were.”

The protesters “are employing the same tactics that lost the election to inspire a revolution,” Fox said. “Dogmatic name-calling did not work on Tuesday, [and] it will not work today to further their cause.”

The desecration of the flag at Wesleyan was mild compared to its fate at American and Hampshire College.

Students at the Washington, D.C. university torched multiple American flags in front of hundreds of their peers Wednesday while some chanted “F*** white America.”

Student Ethan Donahue, who witnessed the desecration while working on campus Thursday night, told the Springfield Republican some students “burned parts of the flag and cut pieces of it.”

College Secretary Beth Ward told the Hampshire community Friday morning that some people on campus had lowered the flag to half-staff Wednesday night out of “deep anger and fear” at the election, and officials left it at half-staff Thursday “out of respect” for those feelings.

A new flag was raised later Friday morning in honor of Veterans Day and the campus community’s student and employee veterans, the Republican said.