No immunity for ‘partial’ university official

The fight for fairness in campus Title IX proceedings is not a slow and steady evolution. It’s a series of Cambrian explosions.

The first came in summer 2016 when the 2nd U.S. Circuit Court of Appeals reinstated a reverse discrimination lawsuit against Columbia University, saying that “fear of negative publicity” is not necessarily a “lawful” excuse for railroading students accused of sexual misconduct.

Another landed Friday, with the 6th U.S. Circuit Court of Appeals reinstating a similar suit against Miami University of Ohio.

The unanimous opinion by Judge Karen Nelson Moore says “John Doe” sufficiently pleaded a claim on “erroneous outcome,” and that an official who investigated and sat on his hearing panel “should have known that she was partial” to his accuser and recused herself. 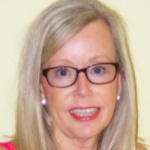 Importantly, that official – Office of Ethics Director Susan Vaughn (left) – does not enjoy “qualified immunity” as a government actor at the public university, The case now goes back to the trial court for rehearing consistent with the 6th Circuit’s ruling.

The findings have already reversed the fortunes of Vanderbilt University and a male student suing it.

In light the recent appeals court decision against Miami U., the district court ruled against Vanderbilt in its motion to dismiss a due process suit. Last year, a former student sued the school over his expulsion based on allegations of sexual assault. https://t.co/nVezu8qLNP

In addition to Vandy, there are pending suits against Ohio State(2), Case Western Reserve, Dayton, Muskingum, Belmont, Ohio Wesleyan, & Oberlin that could be affected by the Miami decision:https://t.co/XEcxV8UPtr

The trial court ruling under review by the 6th Circuit was not another one against Miami University last summer, which said it erred by not letting the accused student cross-examine “adverse witnesses.”

Vaughn was a named defendant in that suit as well: She said drinking any alcohol “potentially” negates consent and that she must take the statements of absentee witnesses as “fact.”

In the case that reached the 6th Circuit, John Doe got so intoxicated that he could only piece together his night with “Jane Doe” in September 2014 from text messages.

Jane acknowledged she had “made out” with him “a couple times before” that night, and she had a full memory despite being “a little drunk.” In Judge Moore’s summary of Jane’s statement (below), their sexual activity together “transitioned between consensual and non-consensual acts.” 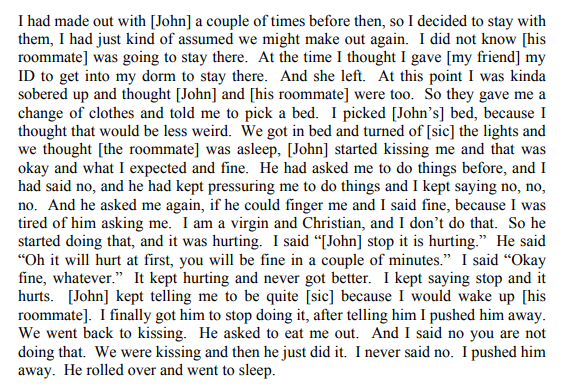 Jane’s “discussion” about this incident with her friends was turned into a sexual-assault report by a resident adviser.

In the Title IX proceeding, John said he wasn’t told who was testifying against him or given a summary of their claims. He accused Vaughn of “dominating” the hearing, favoring Jane and telling him he probably sexually assaults women “all the time.”

According to Judge Moore, this is the “totality” of the finding against John (below).

Several other claims by John were also dismissed, but those that survived should worry college administrators in the 6th Circuit’s jurisdiction: Ohio, Kentucky, Tennessee and Michigan.

Miami University should have opened an investigation of Jane kissing John while he was too drunk to consent, despite John not filing a “formal complaint,” though that one incident isn’t enough to count as “deliberate indifference,” the opinion read.

But Judge Moore faulted the university for ignoring “internally inconsistent” claims in Jane’s muddled statement when it found John responsible for one nonconsensual act but not another. Vaughn, the investigator and hearing panel member, was also under the impression that university policy required “affirmative consent” (it does not).

The appeals court said the university must turn over evidence to test John’s statistical claims about the “patterns of gender-based decisionmaking” that led to his wrongful finding and colored all investigations of sexual misconduct around that time.

In critical passage, CA6 reverses district court, & holds that statistical evidence offered by accused student is sufficient to survive erroneous outcome MTD. First circuit court to use this type of reasoning; a major victory for accused students in CA6: pic.twitter.com/7n5Weise9C

In a finding that echoed the 2nd Circuit’s reasoning, the 6th Circuit also said John’s allegations of “external pressure” on the university to judge male students guilty – by the Department of Education and a high-profile lawsuit by an alleged victim – “support a reasonable inference of gender discrimination.”

Vaughn was in no condition to serve in her assigned roles under John’s allegations, the opinion said. She knew that Jane had “potentially violated” consent rules by kissing John when he was too drunk to consent, but only pursued disciplinary action against John.

She also had “conflicting roles,” allegedly dominated the hearing and showed she could not be impartial by saying John probably commits sexual assault “all the time.”

Thus, Vaughn was in a position to violate John’s equal protection rights and procedural-due process rights, according to Judge Moore.

Court also implies (w/o deciding issue) that students accused of sexual assault at public universities have a right to an unbiased appeals process. pic.twitter.com/orC5JA5vac

Higher education law expert Gary Pavela told Inside Higher Ed this decision was a “clear setback” for the university and Vaughn’s conflicting roles were a “risk-management nightmare”:

“If colleges have employed ideological zealots to investigate and help decide sexual misconduct cases, they’re heading for a recurring series of high-cost, high-profile losing confrontations with the courts,” Pavela said. “The end result will be a nationwide loss of legitimacy in college policies and our capacity to govern ourselves.”