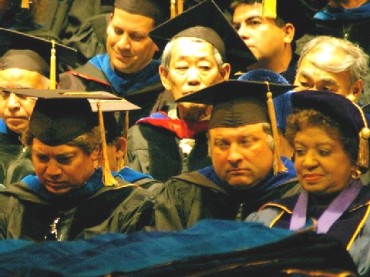 A three-month-old policy at the University of Wisconsin-Madison that insulates professors from harassment has been heralded as a welcome protection against bullying – but concerns remain that the new regulation might be used as a general civility policy, which would run afoul of its original intent.

The policy was initially broached last fall to help stop “unwelcome behavior” at the public university. Examples of such behavior described by a scholar at the university included one woman who “had to deal with a colleague who would only speak to her by barking—literally,” and another who “was banned to the university’s version of Siberia, having his office transferred to the isolated basement of the building that housed his department.”

Faculty members spent much of last semester debating the policy, which many saw as controversial because it could limit the free speech rights of faculty members. Though many agreed anti-bullying measures were needed, concerns were raised that it could use vague, subjective, or overly broad language, effectively criminalizing protected speech.

The initial draft, if passed, would have done exactly that. The section included a problematic definition of “hostile and/or intimidating behavior” that failed to conform to federal standards of harassment. With that, several critics objected, prompting scholars to reform the proposal so it would not resemble a civility code or in any way infringe on the First Amendment.

The final version of the legislation was approved with an “overwhelming” support by a voice vote, Steven Smith, the faculty secretary, told The College Fix. It even included a bolded paragraph ensuring the university’s commitment to the free speech rights of its faculty:

“In no case shall a sanction be imposed in response to a complaint solely about the contents of a faculty member’s beliefs, views, or opinions taken in the abstract. The policy is not intended to constitute a general civility code addressing ordinary stresses of the workplace, such as occasionally insensitive language or behavior. Nor is it intended to constrain commonly accepted workplace management practices. Nor is it intended to constrain the freedom of faculty to speak out about troubling matters, criticize the administration or university policies, take part in political protest, or to promote and participate in labor unions.”

The First Amendment advocacy group, Foundation for Individuals Rights in Education, as well as senate faculty involved in revising the initial draft, praised the inclusion of this strong statement in support of free speech.

Still, the impact of this policy has yet to be seen.

When asked if the policy will in fact protect the free speech rights of UW faculty as it is intended to, Professor Donald Downs said in an email to The College Fix that while the “substance of the policy is well-written…application is always another matter.”

Writing in Minding the Campus, Downs expanded on this thought, suggesting: “Did we do the right thing? This is the $64,000 question.”

Downs wrote that a controversial article published by Inside Higher Ed after the policy was approved that likened it to a civility code was met with anger among many scholars. The Inside Higher Ed article had interviewed UW-Madison’s Dean of the School of Human Ecology, Soyeon Shim, the original inspiration for the policy.

“In that article, Shim portrayed the policy as either a general civility policy, or as an enforcement threat that could be used to compel people to act more civilly—even though the policy expressly disavows this intent,” Downs stated. “If Dean Shim’s comments reflect the intentions or orientations of individuals who will be bringing claims or who will be involved in the enforcement process, the policy will prove to be a mistake.”

It is unclear whether the senate will propose new enforcement mechanisms to guarantee that the policy is applied properly and fairly.

“The legislation as passed already includes significant safeguards that would prevent its being used to silence opinion or otherwise curtail academic freedom,” Smith said in an email to The College Fix.