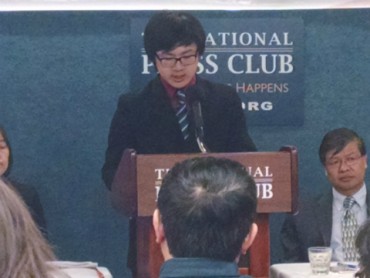 Spurred by Students for Fair Admissions’ lawsuit against Harvard University, a coalition of more than 60 Asian-American associations filed a complaint with the departments of Education and Justice, asking for a civil-rights investigation into Harvard’s alleged discrimination against Asian-American applicants.

At a press conference Friday afternoon, the coalition’s representatives invoked Martin Luther King Jr. several times and tangled with another Asian-American group that supports affirmative action, even as they took pains to emphasize that they support socioeconomic-based preferences.

The coalition’s new push also drew an immediate response from Asian-American members of the U.S. Commission on Civil Rights, who said they hoped the complaint wasn’t a “back door attack on affirmative action.”

It cites research going back to 2007 showing Asian-American applicants need much higher scores than other ethnic groups to be admitted, and that their presence at Harvard has remained flat despite their population doubling in the past two decades.

As a result, Asian-American students face “stress/mental health issues, pressure to study more as the bar is raised higher, lack of trust in American institutions, self-identification crises, and fortification of racial barriers,” the summary said.

The coalition wants Harvard to stop using racial quotas or “balancing” as well as “subjective components” used for balancing, and stop using stereotypes of Asian-American applicants in evaluating them. It implies federal agencies should keep tabs on Ivy League admissions practices indefinitely.

Any admissions system “designed to limit Asian-American applicants is not acceptable, it is morally wrong and it infringes on the constitutional rights of Americans,” Rep. Dana Rohrabacher, Republican of California, told the press conference, interrupted by immediate applause from a packed room of mostly Asian-American attendees.

Rohrabacher recounted how he “tried to deal with [admissions discrimination] 20 years ago and frankly got shoved to the back of the line,” referring to an earlier investigation by the Education Department’s Office for Civil Rights that cleared Harvard of wrongdoing against Asian-American applicants. The congressman urged Asian Americans to ask their representatives to sign his letter calling for a new investigation into Harvard. He said he’ll sponsor new legislation that requires the Department of Education to “officially document, I would say, these crimes” against Asian Americans by studying admissions practices.

That study will “give us the leverage that we need,” said Rohrabacher, noting that three of five of his Orange County commissioners are Asian American, and “that’s a great thing.”

Michael Wang, who filed complaints against Yale and Princeton in 2013 after they rejected him, told the press conference his academic accomplishments – second in his class, high scores all around and many extracurriculars – should have made him a lock for admission.

“I’m not here to brag about my achievements,” Wang said, describing the “helpless” feeling he had reading rejection letters.

“I can’t change who I am. Being Asian is part of my identity and something I should be proud of,” Wang said: But when schools set quotas against Asian Americans, they learn that “everyone is equal but some people are more equal than others.”

That sense of despondency among Asian-American students was reiterated by speakers, most of them first-generation immigrants.

“I’m an American. Treat me like an American,” said Ajay Kothari, a self-described “Ph.D. rocket scientist” who leads the D.C. chapter of the American Society of Engineers of Indian Origin.

He dreads having to tell his nieces and nephews, “You can work hard but you won’t get what you deserve … because you are Indian American.”

If Harvard wants to “make a point,” it should give preference to Indian Americans on its sports teams even though they tend to be worse athletes, Kothari said. “Why are you not doing that?”

An Asian parent in the audience said his peers know that “Asian boys are just impossible” to get into the Ivy League – they “might as well buy a lottery ticket.”

Chunyan Li, a professor of accounting at Pace University and coalition organizer, responded that she met with Rep. Virginia Foxx, Republican of North Carolina, and they talked about the possibility of a gender-discrimination lawsuit on behalf of Asian-American males.

A spokeswoman for Foxx told The College Fix that a “potential lawsuit was mentioned in passing” during a meeting with Foxx, “but it’s not anything our staff has details on.”

Organizing committee chair Yukong Zhao told the press conference that Asian-American students are the “most underrepresented group” in the Ivy League based on their application numbers.

“Many Asian-American students have almost perfect SAT scores,” and they are treated as a “monolithic bloc” that lacks creativity and risk-taking under the “subjective holistic evaluation approach” used by elite schools, said Zhao, a Chinese-American author who helped stoke outrage in 2013 against talk-show host Jimmy Kimmel for joking about killing Chinese people.

Zhao said he tells his son, who tutors less privileged children, that he has to work hard because “other people have higher preference than you.” He wants Attorney General Loretta Lynch and Education Secretary Arne Duncan to stop Asian-American students from being “treated as second class citizens.”

Chinese Americans vs. everyone else?

Coalition representatives took umbrage at suggestions that their goal would hurt other minorities.

When Carl Hum, vice president for policy and programs with Asian Americans Advancing Justice, said from the crowd that affirmative action has repeatedly been upheld as constitutional, Zhao replied that race-based affirmative action is not “effective” because it sidesteps poor children.

The coalition doesn’t mind “using income as a base” to give admissions preferences, Li said. She said recent surveys show 7 in 10 Americans don’t think race should be a factor in affirmative action, so “I would not want to muddle the general issue.”

Yingying Sun, president of the Houston Chinese Alliance, noted her group participates in a coalition that each year pays for school supplies in one or two Houston elementary schools dominated by “underprivileged” students, regardless of race.

Hum’s group released a statement in support of “equal opportunity and affirmative action” at the press conference, citing support from twice as many Asian-American groups as the coalition targeting Harvard.

Asian Americans Advancing Justice accused the coalition of “trying to divide communities” who have benefited from affirmative action, “particularly Pilipino Americans, Southeast Asians, and many Native Hawaiians and Pacific Islanders.” Policies at Harvard and other targeted schools are “race sensitive” but do not amount to “quotas,” it said.

The signatory list between the coalition and Hum’s group appears markedly different by country: The coalition is dominated by Chinese-American groups, while Hum’s group cites a broad range of Asia-Pacific groups, including many student clubs.

Asked why agencies should open a new investigation with Harvard when it was cleared previously, Zhao said all Harvard has to do to prove its innocence is be transparent.

“If they say they have no discrimination, open their book!” Zhao said. If other schools don’t do the same, the coalition will investigate their practices next, he added.

CORRECTION: The Office for Civil Rights is part of the Department of Education, not Justice. The article has been amended to reflect this.