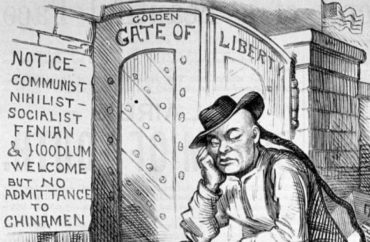 Some of the legal briefs filed in support of Harvard’s system of “holistic” admissions claim that a race-neutral system will mentally harm those minorities who get into selective schools.

To them, more than 150 Asian-American groups have responded: Holistic admissions are already killing our children.

In a friend-of-the-court brief filed by the Asian American Legal Foundation and Asian American Coalition for Education, these groups recount the “blatant discrimination” they have faced historically and continue to face in education:

Harvard’s discriminatory practices have been copied and emulated by countless other educational institutions as the gold standard for achieving skin-deep diversity; but unfortunately, scrutiny reveals that underneath the thin layer of gilt lies nothing but the same old racism.

The “personal ratings” that Harvard assigns to applicants – with Asian-American applicants earning absurdly lower scores than every other group – recalls the historical stereotypes of Asian Americans as “faceless members of a ‘yellow horde’ lacking the values and human attributes of other Americans,” the brief says.

The use of personal ratings to suppress Asian-American enrollment is particularly odious, the groups say, because it recalls and reinforces historic discrimination and stereotypes applied to them.

They cited a California Supreme Court ruling that preceded the Civil War, invalidating the testimony of a Chinese American who witnessed a murder.

The court’s reasoning sounds like the original version of low personal ratings: Americans of Chinese origin are “a distinct people … whose mendacity is proverbial; a race of people whom nature has marked as inferior, and who are incapable of progress or intellectual development beyond a certain point, as their history has shown; differing in language, opinions, color, and physical conformation; between whom and ourselves nature has placed an impassable difference.”

The Asian-American groups cited the historical justifications of so-called “experts” for insulting Asians for their personal qualities, and the long history of litigation that led to their full civil rights.

“It is not widely known, but Asian American schoolchildren were among the first targets
of the ‘separate-but-equal’ doctrine created in Plessy v. Ferguson,” the brief says, denying Chinese children access to “white” schools for most of the 20th century.

It quotes the 1971 ruling in Lee v. Jackson that noted California has historically created separate schools for children of Chinese origin. Brown v. Board of Education, however, “was not written for blacks alone. It rests on the Equal Protection Clause of the Fourteenth Amendment, one of the first beneficiaries of which were the Chinese people of San Francisco,” Justice William Douglas wrote.

“Harvard appears to either disagree with Justice Douglas’ assessment or otherwise disregard it,” the Asian-American groups wrote.

It has created overwhelming study burdens, high rates of depression and even suicides among Asian American children. It also undermines American meritocracy— an indispensable foundation for our nation, by unfairly rejecting many top-performing Asian American students. Their talents could have been fully developed to lead grand projects, solve America’s major challenges, and explore technological and economic frontiers.