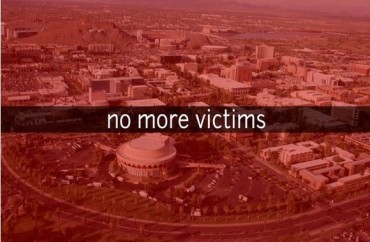 That and other weapons – such as mace and handguns – should be allowed, petition demands

“When we ask what a defenseless 120-pound woman should do if attacked, ASU’s official answer is ‘call 911.’ We respectfully submit that this is unlikely to prevent a student from being victimized.”

That’s one argument a newly formed group of Arizona State University students is putting forth as it demands their campus allow students to carry basic self-defense items – everything from mace and knives to stun guns and handguns – arguing their school’s draconian anti-weapons policy is actually dangerous to students.

As it stands, the public university’s policy states any object or substance designed to inflict a wound or cause injury is banned, and that includes handguns, knives, stun guns such as Tasers, and mace. If faced with a dangerous situation or a threat to their lives, ASU students are told to call 9-1-1, according to the policy.

Campus officials point out that school policy does permit knives with blades shorter than five inches and over-the-counter self-defense chemical repellents such as pepper spray. However, oleoresin capsicum is listed as prohibited, and that is the No. 1 ingredient in over-the-counter pepper spray. It’s unclear how both policies can coincide.

Meanwhile, the policy remains a concern to students who say they have been stripped of ways to defend themselves. calling on ASU to change its self-defense regulations.

Jacob Pritchett, an ASU student and a spokesman for ASU Students for Self-Defense, said in an email to The College Fix that his group believes “the university should put the safety and rights of the student before all other interests.”

“The ASU administration [must] cease all policies of weapon prohibition and allow the peaceful carry of tasers, stun guns, knives, pepper spray, mace, and handguns by students who are eligible to carry these weapons outside the university,” he added. “We support the students’ exercise of the human right of self-defense, and thus call for an immediate end to the violation of that right at our university.”

Asked to respond to the petition, ASU spokesman Jerry Gonzalez told The College Fix in an email that campus officials care very much for student safety, citing its “more than 80 sworn police officers and detectives who, through proactive law enforcement, patrol the campus, conduct investigations and provide students, faculty and staff with safety services.”

“Arizona State University’s top priority is providing a safe and secure environment for the entire campus community,” he said. “A variety of resources help maintain a safe educational environment for students, both on and off-campus, as well as faculty and staff.”

He added the campus offers a “safety escort service,” and emergency call boxes are located across campus, among other measures.

CLARIFICATION: This article has been updated to clarify that school policy does permit knives with blades shorter than five inches and over-the-counter self-defense chemical repellents. The original version indicated pocketknives were prohibited.

IMAGES: ASU for Self Defense