OLYMPIA, Wash. — The other day I walked through Evergreen State College enjoying a nice spring day. As I continued my stroll, I sipped at my cup of fair trade organic coffee in a compostable cup (hey, this is Olympia after all) and marveled at the twin joys of early spring in the Puget Sound and how good a cup of coffee can taste.

Evergreen is an idyllic place, a 1,000-acre campus covered in forest and flanked by a beach.

Indeed, the recent ruckus that has inflamed this 4,000-student public school is not mirrored in its environmentally friendly atmosphere and progressive vibe.

I’m left wondering, where is the racism I keep hearing so much about? This place is so not racist. If it was any less racist, it could be the textbook example for MLK’s dream. It’s so far left its professors and policies often make Bernie Sanders look moderate.

Yet I kept hearing about racist campus police, and racist professors, and racists campus policies, and institutional racism. Then I asked for specifics. Big mistake.

The response I get in person and online can be summarized thusly: “Asking about racism is perpetuating racism.” “Seeking evidence is oppressive.”

As Evergreen biology Professor Bret Weinstein so infamously found out when he tried to engage in a dialectic with students who cornered him in the hallway and shouted him down, there is no discussion when it comes to the topic of racism here on campus. You’re either with the mob, or you’re not. There’s no middle ground.

The howling throng of black and white students who came together in a multicultural display of unity to shut down a classroom, take an administration virtually hostage, and engage in an infamous display of childlike-temper tantrums is proof of that. It was an act of anti-intellectual barbarism unseen before in Evergreen’s nearly 50 year history.

And entirely unnecessary. As someone who has been a student at Evergreen since last fall, I can say in my humble opinion this campus is a far, far cry from racist. And lest we forgot, our conduct code prohibits racism and discrimination in all it’s myriad forms, and it is constantly referenced and referred to for guidance.

There are also specific anecdotes of excellence. My first professor here was an absolutely amazing black woman who grew up in the segregated South. She teaches constitutional law and constantly emphasized that the law must be handled neutrally and without preference. We learned from many, many unfortunate cases where that did not happen, tracked the growth and evolution of laws protecting civil rights, and discussed how to continue moving forward with the law into perfecting that equality and ensuring equal rights for all Americans.

Elsewhere I see a constant effort to pay more than just lip service to equality. Evergreen is a diverse campus, with students from all over the United States and overseas, and from many socioeconomic backgrounds.

If there is racism, it most certainly isn’t overt, except for the likelihood of students being jerks to each other. But the deep-seated, institutional racism and white supremacy currently advertised as being dominant on campus? Highly doubtful.

Maybe I’m not invited into the secret Evergreen White Power cabal, or maybe I missed the ads for it. Point is, if there is a dominant white supremacy structure at Evergreen, I’m not seeing it. A lot of white people aren’t seeing it, and we certainly aren’t participating in it.

But Evergreen activist students are using the accusation to force compliance with their radicalized agenda — an agenda so radical even many among the left wing denounce it. Keep in mind, Weinstein is a self-described liberal atheist.

Which brings us back to some of the impetus of this recent insanity — the “Day of Absence,” in which white students and employees were asked to avoid campus for the day.

It illustrates a university willing to bow down at the altar of identity politics, to flagellate itself for its white privilege, to worship diversity with religious fervor, to ignore facts and celebrate feelings. Again I ask: What racism?

As one staff member put it: for a white person to be seen on campus that day would have been akin to “crossing the picket line.” A building manager even contacted HR to determine whether white campus employees should show up to work that day. (I am a white student and part-time student worker and I was not on campus that day).

And what has all this segregation in the name of racial understanding wrought? Is there more inclusion on campus, more tolerance? Hardly.

In the ensuing madness that followed, the campus has been shut down on three separate days for various threats against it. Weinstein had to hold his class off campus after police said they couldn’t keep him safe. A group of faculty have called for Weinstein to be punished for daring to speak his mind. And a group of campus vigilantes have taken to patrolling the school armed with bats and batons.

There is little unity on campus, and instead a doubling down on identity politics, leftist posturing and extremism. We are reduced now to watching elements of the college destroy a viable, vibrant institution from within, and expose our collective dirty laundry to the world as a whole, instead of behaving like academics and solving our problems among ourselves.

In the end we’ve learned that even one of the most liberal small colleges in the nation can never be liberal enough for the radical left. And to what end? One of the worst developments are that black faculty have received emails calling them obscene names and expressing hope for their lynching. This is unacceptable. The threats must stop. The Board of Trustees or the state should step in and force a regime change in administration that will ensure this kind of disruption can never happen again.

I say this as a non-traditional student in nearly every way. I’m 37 years old and a junior. I’m a gun-toting libertarian atheist who voted for George W. Bush. Twice.

I wound up at Evergreen because it was affordable, local, and offered a highly personalized instruction. But today I’m glad that I only come to campus a few times a week to work as an office assistant and attend my evening class. The rest of my classes I complete from home. I guess you could call it my safe space. 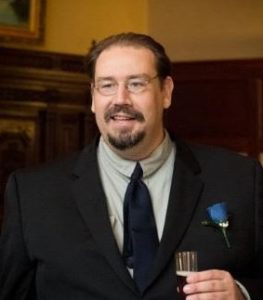 About the author: Steve Coffman is a junior at The Evergreen State College in Olympia, where he studies U.S. history with a focus on industrialization. He works part time as a freelance writer focusing on guns, antique electrical insulators and historical matters of interest. As a libertarian, he is concerned with free speech issues on college campuses.