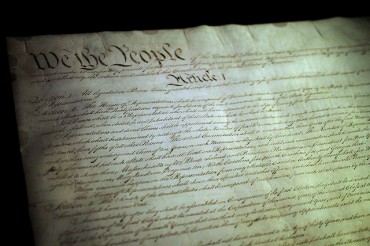 Several universities across the nation used recent Constitution Day activities to criticize the founding document, or America in general, despite the fact that the observance calls for civic education and commemoration.

Keyssar’s lecture, named after his book “The Right to Vote: The Contested History of Democracy in the United States,” touched only in passing on the passage of the Thirteenth, Fourteenth, and Fifteenth Amendments. Instead, most of the speech tied today’s voter ID laws, passed largely by Republican legislatures, to the Jim Crow-era.

“The dirty little secret of democracy in America,” Keyssar opined in his speech, “is that not everyone actually believes in it.”

In another example, a recent Drake University event featured Georgetown University law professor Michael Seidman, who stated in his guest lecture at the Iowa campus that “we should give up on the idea that we have an obligation to obey the Constitution of the United States,” according to an article in the Times-Delphic student newspaper.

The article also notes that Seidman referred to the Constitution as “outdated,” said countries such as England and Australia, which don’t have a Constitution, have better civil liberty records than America, and “that the Constitution prevents beneficial discussions from taking place in the United States.”

Meanwhile, at Wesleyan University, Judge Stephen Gold delivered a recent Constitution Day talk that appeared to be only tenuously related to the broader mission of Constitution Day. It was called “Imposing Sentence: The Balance Between Affording Discretion and Avoiding Disparity.”

And an article by The Heritage Foundation’s Bronson Stocking took aim at recent Constitution Day event at UC Berkeley, noting that:

“ … the University of California, Berkeley was celebrating the signing of the Constitution with a panel discussion on the topic of ‘the history, growth, and future of America’s prison-industrial complex.’ The title of the event, ‘The Constitutional Crisis of Imprisonment: Mass Incarceration and the Future of America Democracy,’ suggests the direction that planners had decided to steer the conversation. It’s unclear if students emerged from the ‘discussion’ about ‘the prison-industrial complex’ with a rich understanding of the U.S. Constitution.”

Despite these egregious examples, most universities across the nation respected the Constitution in supportive and honoring ways, from passing out copies of the Constitution, to reading parts of it out loud, to hosting fun and creative game shows and other lighthearted events to brush students up on their knowledge of the historic document.

This year, Amherst College kept things simple, with various professors and students volunteering to read the text aloud. Hillsdale College rang in the Constitution’s birthday in elaborate fashion, with a multi-speaker colloquium and online Constitution 101 lectures for the public at large. Notably, Hillsdale is one of only a few U.S. colleges that forego federal loans and subsidies.

That’s an important fact when considering that a law passed in 2004 requires all American universities that receive federal funds – virtually every college in the nation – to recognize Constitution Day in some fashion.

If recent data is any indication, that’s needed now more than ever.

Of the 14,000 surveyed, freshmen at elite institutions like Yale, Cornell and Princeton actually out-scored the seniors, suggesting a brain drain as students move toward their degrees at the Ivy League and elsewhere.

Fix Contributor Danielle Charette is a student at Swarthmore College.