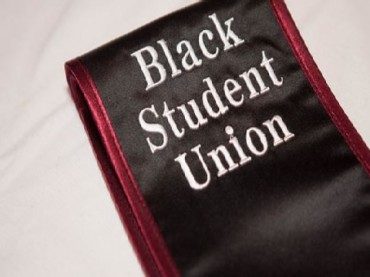 The Being Black at the University of Michigan movement – a name by which one can immediately grasp the character of its organizers – and subsequent Black Student Union protests and demands, have their roots in a Nov. 2013 advertisement by a fraternity for a “Hood Ratchet”-themed party on campus.

The theme was decried as an example of racism against black students, but no mention was made of the fact that black students on campus and black cultural icons make frequent use of the term toward themselves.

Students then took to Twitter, using #BBUM, to attack the university administration for such terrible crimes against black students as “having your opinions be second guessed or ignored in a group assignment” and “being soft spoken in class because you don’t feel you belong, but then being docked points because you are not engaged in class.”

What has since transpired was a reading of a list of seven demands by the Black Student Union; the granting of $300,000 to the Trotter Multicultural Center to appease those demands; the creation of a “Color” section of the Michigan Daily student newspaper; and an ongoing student campaign to bring race and ethnicity requirements to the Engineering school. The nature of the demands can be illustrated by the tactics of the protesters, who threatened, ambiguously at first – “physical action” – if the administration did not capitulate within seven days. While they later qualified their statement and remarked that they did not mean violent action, this did not stop the protestors from taking over the undergraduate library and demanding that students who were studying move elsewhere. Nor did it stop the threats, slander and harassment of students by the #BBUM-allied campus group By Any Means Necessary, who late last year also protested an event about the Michigan ban on affirmative action by banging on the windows of the venue and making the atmosphere of the event so unsafe that the speaker, Jennifer Gratz, had to be escorted away by police.

Instead of sanctioning the BSU and its affiliates, as the administration would have and should have done for any right-leaning group, on Jan. 21, Provost Martha Pollack took the protestors side in an email sent to the Michigan community in which she wrote that administrators:

…have identified three areas that need our most immediate attention: improving campus climate, increasing enrollment of underrepresented minorities to the fullest extent permitted by law, and addressing issues surrounding the Trotter Multicultural Center.

What exactly was wrong with the campus climate before the protests was never defined. Nor was it explained how the blocking of traffic and threats of “physical action” contributed to improving the student climate. The most important evasion by Pollack, however, was in her failing to answer why diversity of skin color constitutes a kind of diversity that will add to the intellectual life on campus, and how equality can ever be achieved in a system that values race over merit.

University President Mary Sue Coleman then characteristically invited the students for a formal sit-down. During the discussions, which were nothing more than a puff job since the administration had already decided to give in to the BSU’s demands, the university offered $300,000 for “renovations” to the Trotter Multicultural Center, a building intended for use by minority students only. What exactly these “renovations” entailed was never made public.

To reward these students, to even negotiate with them, is to lend sanction to an act of extortion and to teach students that threats of ambiguous and possibly illegal actions are right. Worse still, it is a savage hypocrisy for a self-styled “progressive” institution of higher education to doll out favors to certain groups because of the color of their skin. Gratz notes the problems that pandering to skin-deep special interests causes:

… The result of monumental efforts to restore special preferences for certain races and ethnicities has been to reinforce a way of thinking that imposes stale racial categories on unique individuals. Sadly, it is no wonder that students struggle with racial stereotypes when their administrators insist on treating minorities as racial tokens.

Indeed, how can administrators expect a campus in which people are judged by the content of their character when they tell students that the color of their skin is the most important thing they have to offer? Such a stance does not only serve to hurt race relations on campus, but is itself, to use a much abused word, racist.

Not content with taking free money at the expense of their peers and alumni, the BSU worked with the Central Student Government to craft a resolution on racial diversity. The proposal included student government support of the seven demands of the Black Student Union, increases in recruiting among minorities, and the creation of the Dream Scholarship for undocumented students. The resolution also demanded that minority enrollment be doubled, though it offered no solution as to how this could be accomplished within the bounds of the law.

Once more, the integrity of the resolution can be judged by the behavior of its drafter, Samual Molnar, who, when asked by the Michigan Daily what he thought of a free speech amendment proposed by student government President Michael Proppe, replied:

The amendment was turned down, but the student government assembly eventually decided that it could lend some limited support to free speech if it directly related to combating racism. The final amendment reads: “CSG defends the right of all students to speak the plain truth about racism,” which does nothing more than grant protestors the protection to label anyone who opposes them a racist.

Perhaps the decision would have gone differently if the Michigan Daily had honestly reported the facts for what they were: a small group of radical students, claiming to represent all students, being pandered to by the university after issuing unconstitutional and racist demands, and slandering anyone who spoke out against them. But the Daily, outdoing its own previous commitment to untruth, launched Michigan in Color, a blog dedicated to inflating the scale of the protests and undercutting opposition.

A bit of unlettered writing – characteristic of the blog  – which appeared in a post entitled “Angered and Intimidated” on Feb. 18, best captures the reasoning that informs the entire movement and the shameless attempt by the Daily to puff it up:

Even more telling though is the attitude the Daily has taken toward students who disagree.

When a student, who will remain anonymous, submitted an article that questioned the validity of the entire movement, Daily staffers informed him that they could not publish the article because they did not want to be offensive. Notice that they did not question the truth in the article, they simply shrugged and tacitly suggested that they didn’t care.

These, ladies and gentlemen, are the products of a university that is consistently ranked among one of the best in the world: students who are trained to respect anything but the truth, and to sneer at, to twist, to deconstruct anything so long as it doesn’t offend a small group of minorities.

A group of these students now seeks to impose race and ethnicity requirements on the Business and Engineering schools, and they will likely succeed, if the past months are any indicator.

The question that is to be asked, when reflecting on this brief history of the movement is: what is it really about? The facts speak for themselves. It has nothing to do with diversity and even less to do with equality.

In an article in National Review, Gratz explained this:

“To date, university officials have championed superficial diversity, and not even the kind that matters. They have found great pride in praising U-M’s racial enrollment statistics and producing pretty brochures highlighting all the different skin colors on campus…”

She goes on in another letter to praise “diversity of thought,” and points out the hypocrisy of an administration that has always been hostile to any idea that doesn’t fit its world view but champions something so insignificant as diversity of race.

“Race does not determine an individual’s background, views, talents or achievements. Every student, regardless of color, deserves to be seen as he is, not as public officials wish him to be.”

Being Black at the University of Michigan, the Black Student Union, and By Any Means Necessary think otherwise.

What the protestors want is to fight an ill-defined, unprovable “racism” with racism. They want special privileges because of their skin color to be acquired at the expense of other students. They want separate rules and separate treatment for minority students. They care nothing for equality under the law – their very movement is a rejection of legal equality – and what’s worse, they have been able to openly acknowledge this without any serious pushback from anyone within the Coleman administration.

Diversity of thought may be good, they and the university claim, but diversity of color is better. Some Wolverines are equal, but others are more equal.

This article originally appeared March 19 in the Michigan Review and was reprinted with permission. Derek Magill is a student at the University of Michigan.