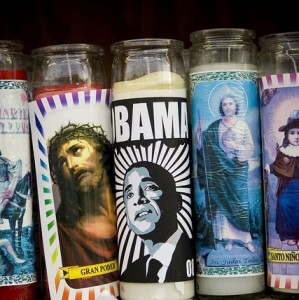 An image of Obama with his arms outstretched and a crown of thorns on his head? Artistic expression.

A picture of the crucifix submerged in real urine? A work of art.

An Obama bobblehead in a jar of fake pee pee? An unacceptable outrage.

When the secular left insults images held dear to conservatives or Christians under the auspices of “artistic freedom of expression,” those who complain are shortsighted, uptight, uncultured, ignorant buffoons.

When those same secular leftists have the tables turned on them, the cry of outrage is swift and deafening.

Recently conservative provocateur Glenn Beck took aim at this hypocrisy with his now infamous “Obama in Pee Pee” piece of “art.” He submerged an Obama bobblehead in yellow liquid with plans to sell it, the proceeds benefitting charity.

As Beck’s website notes, the effort was “catalyzed by Michael D’Anouto’s painting titled, ‘Truth,’ which features a crucified Obama, and also parodies the controversial ‘artwork’ dubbed ‘Piss Christ’ that defaced a crucifix in a glass of urine.”

Most recently, “Piss Christ” was displayed this fall at a gallery in New York. Meanwhile, “Truth” is displayed at the Boston-based Bunker Hill Community College Art Gallery through mid-December.

“Beck’s piece was meant to underscore the importance of adhering to the First Amendment and highlight the hypocrisy of those who adhere to it only when it suits them,” Beck’s website, TheBlaze.com, states. “Often, members of the left will rail against the disparaging of figures they hold dear, but do not hold themselves to the same standard when disparaging figures others hold dear.”

Reaction to Beck’s lesson in the two-can-play-at-that-game cultural First Amendment parody included people on social media calling him every name in the book and telling him he was going to hell. (Because going to hell is not a possible consequence of being disrespectful toward a religion, only when disrespecting Obama.)

Nowhere will you find a clearer demonstration of liberal hypocrisy than here, which is, of course, exactly what Beck was trying to demonstrate. The piece was put up for sale on eBay to raise money for charity, and within 30 minutes was removed by the website (it had already reached an $11,300 bid).

The stated reason eBay removed Beck’s art was because they do not allow the sale of human fluids. Note to eBay: no actual human fluids were part of the product; it was just water with food coloring.

The fact is despite all the talk of diversity, open-mindedness and tolerance, we are getting the exact opposite. When liberals talk of diversity what they’re really thinking about is skin color, not opinions or beliefs. It’s all about the image, not about the content. Open-mindedness only includes those who agree with them, and tolerance simply breeds intolerance in its name.

The hypocrisy is astounding, and the issue is simple. If society is going to allow something as foul as the crucifix drenched in actual urine to be displayed in a New York gallery and call it “art,” then a bobblehead in some dyed water should be able to be sold for charity on the Internet. This isn’t rocket science, and more to the point, our Constitution demands it be so.

Underscoring all this, the recent kerfuffle highlighted that bigotry against Christianity remains an acceptable form of prejudice in the United States.