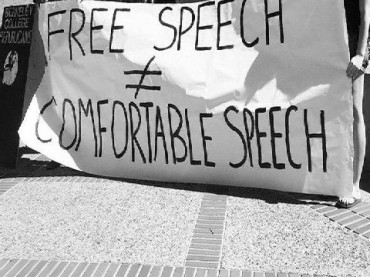 OPINION: On the 50th anniversary of the Free Speech Movement, its hypocrisy is exposed

September 2013: After several Mexican-American members of the campus fraternity Delta Chi suggest hosting a quinceanera-themed party, the student government condemns the frat for “appropriating the culture” of Mexican-Americans.

December 2012: Citing their “disapproval” of the viewpoints espoused by the second largest charity in the Unites States, the Berkeley student government passes a bill to boot Salvation Army donation boxes from campus, arguing the charity’s presence on campus creates a hostile and uncomfortable environment. And on Friday, as UC Berkeley students and faculty wrapped up a week-long celebration to mark the 50th anniversary of its Free Speech Movement, the UC Berkeley College Republicans illustrated to our peers how the university has actually turned its back on the First Amendment.

To that end, club members stood in front of Sproul Hall holding a large banner that read “Free Speech [does not equal] Comfortable Speech” – and it got students’ attention, as the positive platitudes they’d heard all week about the movement were vehemently challenged.

According to the Berkeley College Republicans, the true essence of the Free Speech Movement has been lost in recent decades. The ideals of the movement have been discarded, replaced with notions such as tolerance and civility.

In the 1960s, students broke out from within the constraints of the status quo. They said the things parents and professors and peers were telling them not to. Today, and especially on the Berkeley campus, conservative students are the ones taking a stand, and yet we’re maligned and ostracized for it.

In the aftermath of the Berkeley College Republicans’ 2011 “Diversity Bake Sale,” the student government attempted to have the club defunded due to the argument that the speech the club engaged in was disrespectful and uncomfortable.

Our display on Friday intended to bring to light the many breaches of free speech that have taken place on campus, sponsored by organizations such as the student-body government at UC Berkeley.

Alongside the banner, club members passed out fliers containing a list of incidents in which campus leaders limited various students’ right to exercise their personal liberties. The flier also attacked the campus for its recent movement to discontinue the exchange of academe between the UC system and Israeli universities, another example of UC Berkeley silencing any communication and discourse that may offend or upset some individuals.

There is a strange perversion of free speech taking place on this campus. It’s perfectly acceptable to occupy campus buildings and create pinatas out of the UC president’s image, but that’s only because the individuals in question fall under one school of thought. As soon as someone different comes along, and stirs the pot, they’re pointedly silenced.

Throughout the day, our club passed out hundreds of fliers and displayed our sign from the morning until late into the afternoon. Students came up and asked questions, and many seemed interested in the cause. Others were shocked to learn about the many times their campus – the birthplace of the Free Speech Movement – had overtly suppressed open dialogue.

“The people I talked to seemed to agree with the point our message was trying to get across,” said Edward Saenz, a member of the Berkeley College Republicans. “No one I talked to believed that free speech should have stipulations tied to it.”

College Fix contributor Claire Chiara is a student at UC Berkeley and president of the Berkeley College Republicans.