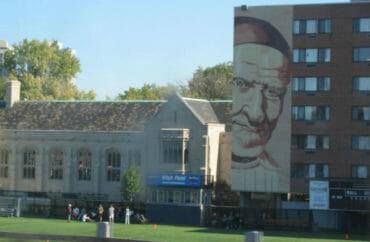 Last month DePaul University’s student paper asked where all the Catholics are at the nation’s largest Catholic university, with more than 22,000 students.

Not only is its new president not a Catholic priest for the first time in its 120-year history, but DePaul’s first-year population that identifies as Catholic has fallen 19 percentage points in the past decade. They are no longer a majority.

Catholic Campus Ministry events aren’t even drawing the self-identified Catholics, with attendance between 10 and 25 students at most weekly events, according to The DePaulia.

There’s an obvious answer to this mystery. To quote one of the lapsed Catholics, “DePaul doesn’t feel like a Catholic school at all”:

With signs welcoming LGBTQ+ youth, it doesn’t feel like the Catholic faith of yesterday. …

“DePaul has more of a progressive, liberal Catholicism,” she said. …

Many Catholics believe that for the Catholic Church to stay relevant, it will need to redefine some of its values, especially when it comes to LGBTQ+ and women’s reproductive rights. …

Without hesitation, [Rev. Jeremy] Dixon said that anybody can be gay and still be Catholic.

Why would faithful Catholics want to attend a school that is openly hostile to orthodox Catholicism? That prods students to become LGBT activists? That bans pro-life activism? That employs a Muslim official who supported “re-establisling the Islamic State“?

Thompson, the CCM director, responds: “This is a place of dialogue.”

Except it’s not, even in the eyes of the secular world.

DePaul has earned the first-ever “Lifetime Censorship Award” from the Foundation for Individual Rights in Education as part of the free-speech group’s annual “10 worst colleges for free speech” list.

For the first time, FIRE is presenting our Lifetime Censorship Award. This “honor” goes to the one university that is so frequently discussed as a contender for our annual “worst colleges" list that it deserves special recognition.

It has a “decade-long rap sheet of censorship spanning the ideological spectrum,” FIRE said, yet the Catholic-lite school consistently favors progressive censorship:

Demanding a hefty security fee from the College Republicans, not protecting their speaker from disruptions and refusing to reschedule

And according to FIRE, the school never responded to FIRE’s August letter asking whether its free-expression promises mean anything in light of the “Gay Lives Matter” censorship.

Maybe there’s a connection between DePaul’s contempt for orthodox Catholicism and its censorious habits. If you think so too, FIRE has a free-speech form you can send DePaul.