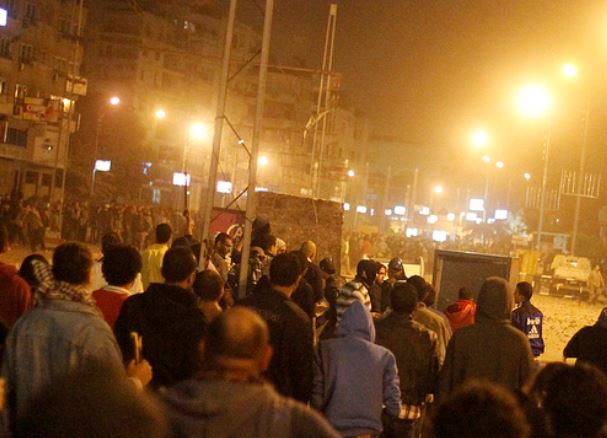 The overthrowing of a democratically elected government at the hands of the military is rarely a thing to celebrate. In Egypt, it probably is.

On July 1, Egypt’s military, reacting to the 17 million demonstrators who had taken to the streets, issued an ultimatum ordering then president Muhammad Morsy to “meet the people’s demands” within 48 hours. The protests continued and on July 3 the military seized power.

Morsy’s opponents hailed the event as a second revolution, the first being the Jan. 25, 2011 revolution that toppled the regime of long-time military dictator Hosni Mubarak. Morsy’s supporters decried the event as a coup against a legitimately elected regime.

Before power changed hands, the Obama administration suggested Morsy placate the protestors by promising early elections. They warned the Egyptian military against a coup, on pain of jeopardizing the approximately 1.5 billion dollars of annual aid guaranteed by the Camp David Accords.

As of this writing, they have not followed through. Nor have they declared the event to be either a “revolution” or a “coup,” leaving it open which narrative will be the official one. The administration appears to be holding the word “coup” above the military’s head like an axe to pressure them into transferring authority to a democratic government as rapidly as possible.

A host of left-leaning analysts agree with the administration’s priorities. So do some prominent Republicans, including Sens. John McCain and Rand Paul. Both men advocate the suspension of the military aid until elections are held, and Paul even introduced a bill to that end.

I write as a Fulbright alumnus who returned from Cairo a few weeks before these fateful events took place. My nine months of Islamic philosophy research there do not make me a policy expert. Nevertheless, I spent enough hours reading the Arabic press in coffee shops, studying the history of the region, and hearing the word on the street to have a few educated opinions.

Military dictatorships are strategically minded, interested in power. To this end, they will jail political opponents, suppress critical media, and fire on peaceful demonstrators. But they are not typically interested in imposing a specific religious ideology on every aspect of society.

The Muslim Brotherhood and the even more extreme Salafists have, to put it delicately, more comprehensive agendas in mind. Fellow Egypt Fulbright alumnus Richard Mitchell shows in his book, The Society of Muslim Brothers, that Brotherhood founder Hassan al-Bana began his moral policing career quite early in life.

As a 12-year-old schoolboy al-Bana joined, and quickly became the leader of, a club called the Society for Moral Behavior, in which members undertake to pay fines for infractions like cursing. Sounds innocent, but little Hassan had bigger things in mind. When he was 13, he became the secretary of a more radical organization that emphasized imposition of “Islamic” morals on society at large. That group became the model for al–Ikhwan al-Muslimeen, or Muslim Brotherhood, which al-Bana established in 1928.

The Ikhwan motto is, “God is our goal, The Qur’an is our constitution, the prophet is our leader, jihad is our way, and death in the name of God is our highest aspiration.”

Al-Bana exhorted his followers to practice “the art of death.” Not surprisingly, the Ikhwan were an inspiration to Islamic terrorists all over the world, including Osama bin Laden. Hamas, the Palestinian terrorist organization, began as a chapter of the Ikhwan and fervently supports them.

Since the Brotherhood’s thoroughly duplicitous ascension to power in the parliamentary and presidential elections of 2012, a neologism has proliferated in Egyptian press, Akhawna, or “brotherization.” It denotes the process of the Ikhwan fundamentally remaking society in their image.

We find a clear case of brotherization in the hijacking of the constitutional drafting. The newly empowered Ikhwan government promised to help ratify a constitution that all Egyptians could accept. In reality, moderates and Christians on the drafting committee resigned in droves when they realized they were but token presences.

Cynical moderates boycotted the two-stage referendum held Dec. 15 and Dec. 22, 2012, fearing their votes served only to legitimize the inevitable affirmative. As a result, the referendum passed 64 percent to 36 percent, but with a depressed voter turnout rate – 33 percent as opposed to 50 percent for the presidential election and 58 percent for the parliamentary election.

Before the July 3 takeover, the Islamists were the ones with the momentum and the political machinery while the moderates hobbled weakly behind. Had the military not intervened, the brotherization would have continued, a danger that seems lost on many. It seems like a long shot, but the military intervention may buy the moderates time.

Not everyone sees the danger.  Tamara Cofman Wittes, a senior fellow and director of the Saban Center for Middle East Policy at Brookings Institution, is among those who advocate cutting aid. She wrote for CNN: “As a result [of the July 3 coup/revolution], the United States – which has great stakes in Egypt’s stability – must use its limited leverage to nudge Egypt back onto a democratic trajectory.”

What democratic trajectory? Fielding candidates in an election shows that you value democracy as a means, not as an end unto itself. Turkish Prime Minister Recep Tayyip Ergodan once notoriously described democracy as a train you get off when you reach your destination. Before we pressure Egypt into boarding, we’d better have a clear idea as to where that train is headed.

If our leaders pressure the Egyptians into buying a one-way ticket to brotherization, it will be too late to stop the train.

Fix contributor Spencer Case is a philosophy graduate student at the University of Colorado. He is a U.S. Army veteran of Iraq and Afghanistan and an Egypt Fulbright alumnus.