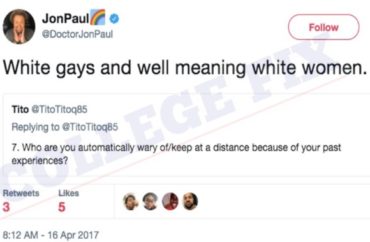 The new director of the Claremont Colleges’ LGBTQ center has drawn concern from some students upset over his tweets saying he’s “wary of white gays and well meaning white women” and that police exist to “service and protect white supremacy,” among other controversial statements.

Dr. Jonathan Higgins was recently tapped as the new director of the Queer Resource Center of the Claremont Colleges, a cluster of five elite private campuses in Los Angeles County.

After several of Higgins’ controversial tweets made the rounds among students at the consortium, several LGBTQ-identifying Claremont Colleges students spoke with The College Fix on the condition of anonymity to describe their unease with the new director.

At issue is his public* Twitter account, which he actively promotes on his professional website. The students said they are concerned his apparently anti-white, anti-police views will carry over into misguided teachings and unequal treatment at the Queer Resource Center.

Higgins has yet to address requests for comment from The College Fix about the concerns.

One tweet prompting unease is from April, made in response to a user who asked: “Who are you automatically wary of/keep at a distance because of your past experiences?” Higgins replied: “White gays and well meaning white women.”

One white, gay student told The Fix they feel they would not receive equal treatment under Higgins’ oversight.

Another tweet drawing apprehension from some students is from December 2016, in which Higgins wrote: “I finally have nothing to say other than police are meant to service and protect white supremacy.” This post came on the same day as an officer-involved shooting in Maryland, though Higgins has yet to clarify whether there is a connection between this event and his post.

Another gay student at the Claremont Colleges said the tweet concerned him “because my family is heavily involved in law enforcement and because I have many siblings and cousins, all of whom I support and love deeply, who serve as officers.”

“My family will only ever be seen as enforcers of white supremacy in Higgins’ eyes with myself as an enabler,” the student continued.

A third tweet of Higgins’ prompting concern was posted in late June: “So y’all been real quiet about #heterosexualprideday, I mean I thought I’d see parades celebrating rape culture, homophobia and transphobia,” it stated. Higgins added: “Oh wait: y’all do that everyday…..”

A transgender student, speaking with The College Fix, said reading that was difficult.

“Only through a long, difficult journey have I arrived at the conclusion that I am heterosexual,” he said. “Much of the success of this powerful journey comes as a result of my wonderful mentors who are open-minded to every possibility. Based on his statements on social media, it is clear that Dr. Higgins associates heterosexuality with only negative causes and that he thinks to be openly proud of one’s heterosexuality, as I am, is to ‘celebrate rape culture, homophobia and transphobia … everyday.’ His statements demean my efforts and are uncharacteristic of both my experiences with the QRC and the center’s own mission statement.”

Jan Collins-Eaglin, the associate dean of students for wellness and disability coordinator at Pomona College, who announced the center’s hiring to the Claremont community, wrote Higgins “is a motivational speaker dedicated to empowering all LGBTQ students with an emphasis on students of color.”

Professionally, before arriving at the Queer Resource Center of the Claremont Colleges, he served as the assistant director of multicultural affairs at California State University, Long Beach.