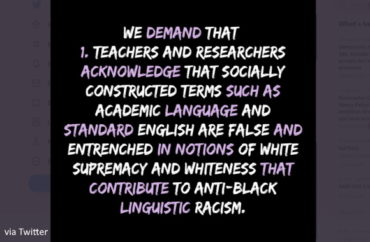 A national professional association of writing instructors recently published a list of demands that argued the current emphasis on standard English is rooted in racism and called for a complete overhaul of how language is taught.

It was published by a subcommittee with the Conference on College Composition and Communication, part of the National Council of Teachers of English.

The statement called for an end to “White Mainstream English,” arguing such an action would “decolonize” students’ minds and the English language, as well as help students “unlearn white supremacy.”

The demands were written by five English professors and a writing scholar and the document is titled: “This Ain’t Another Statement! This is a DEMAND for Black Linguistic Justice!”

“The language of Black students has been monitored, dismissed, demonized—and taught from the positioning that using standard English and academic language means success,” the professors argued.

They added such a set-up “creates a climate of racialized inferiority toward Black Language and Black humanity.”

We demand that black dispositions are centered in the research and teaching of black language.

The entire statement included 33 exclamation points peppered throughout. The demands were penned by a special committee that is also calling itself the “Why We Cain’t Breathe!” committee, according to the association’s website. (The word “cain’t” is described online as a mainly southern U.S. nonstandard form of can’t.)

* Yes, we are the same authors of the 2020 CCCC Special Committee for the Statement on Anti-Black Racism and Black Linguistic Justice, Or, Why We Cain't Breathe! that was released yesterday by CCCC.

Its sixth member is English scholar Teaira McMurtry, listed as being affiliated with University of Alabama at Birmingham.

This Ain't Another Statement! This is a DEMAND for Black Linguistic Justice! – Conference on College Composition and Communication https://t.co/IqZK9bmtJg

The five English professors did not respond to emails from The College Fix regarding their demands. Contact information for McMurtry could not be located.

Baker-Bell, who goes by the name “Ebonically Speaking” on Twitter, is author of the 2020 publication “Linguistic Justice: Black Language, Literacy, Identity, and Pedagogy.”

I got my book and I can’t wait for @aprilbakerbell to present @ITOClove “We Wanna be Linguistically Free Too”: In Pursuit of Black Linguistic Justice on August 20! pic.twitter.com/bu6DgNodJF

Baker-Bell, an associate professor of language, literacy and English education at Michigan State, also touted on Twitter that coming next month she and others will unveil a “Black Language Syllabus.”

Her faculty bio credits her with coining the term “anti-black linguistic racism.”

🚨 🚨 🚨 #BlackLinguisticJusticeWeek ended, but we are launching the Black Language Syllabus in September! Just wait on it….. 🖤✨🖤✨🖤

The statement argues that teachers should stop “telling Black students that they have to ‘learn standard English to be successful because that’s just the way it is in the real world.’ No, that’s not just the way it is; that’s anti-Black linguistic racism. Do we use this same fallacious, racist rhetoric with white students? Will using White Mainstream English prevent Black students from being judged and treated unfairly based solely on the color of their skin? Make it make sense.”

The document points out that “researchers, scholars, educators, and all everyday Black folx center Black Language on its unique philosophies and survivances of Black Life rather than on a set of linguistic departures from a fictional, white norm.”

It calls on teachers to “not dismiss Black Language simply as a dialect of English, and do not treat it as a static anachronism—it’s not a thing of the past, spoken only by Black people who are positioned in a ‘low’ or ‘working class.’ Recognize it as a language in its own right!”

It has been a dope a** experience to be part of The Black Language Scholars Collective! #BlackLinguisticJusticeWeek#IfYouDidn’tKnowNowYouDo
👊🏾👏🏽👇🏽 https://t.co/hftcvhhOc6

While the professors push for black language to be taught to students by black language experts, they also demand that nonnative speakers “refrain from engaging in Black linguistic appropriation.”

Vershawn Young, chair of the Conference on College Composition and Communication and a professor at University of Waterloo, told The College Fix via email that he was “unable to take the opportunity to respond in writing to 11 substantive questions.”

The College Fix had asked Young — as well as the professors who wrote the document and declined to comment — a set of 11 questions. They are republished below:

1. What are the main ways a teacher can champion linguistic justice?

2. Is an “accepted communicative norm” necessary?

3. If so, what language should take the place of standard English/academic language as the accepted communicative norm?

4. If not, how would the education system need to change? What would that look like? How would grammar and spelling need to be taught?

5. To what extent should standard English and English literature be deemphasized?

6. What is “code-switching”? How do teachers “force Black youth to code their language”?

7. If Black Language should be acknowledged in the curriculum, what about other languages (especially those of other minorities)?

8. Would it be considered cultural appropriation for white teachers to speak and teach Black Language, especially to white, Asian, American-Indian students?

9. Should all students learn and speak Black Language?

10. Does the demand that “ALL WORK related to Black Language and Black youth commit unequivocally to the freedom, dignity, and creativity of young Black people’s lives rather than demand more data extraction and labor from them,” mean empirical research shouldn’t be conducted?

11. Is telling white students they have to “learn standard English to be successful because that’s just the way it is in the real world” fallacious? Or is such a comment only fallacious and racist when it’s directed toward minority students?

Read the full list of black linguistic justice demands on the Conference on College Composition and Communication website.