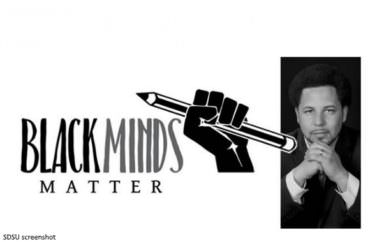 A controversial new graduate-level course at San Diego State University called “Black Minds Matter” that many students on their way to earning their teaching credentials will enroll in has come under fire from some conservatives as extremely biased and politically motivated.

Guest speakers for the course will include black professors from across the nation as well as the co-founder of Black Lives Matter and the daughter of Malcolm X.

The course was developed based on the premise of Black Lives Matter, prompting several California-based conservative activists to denounce it as a taxpayer-funded attempt to train future teachers how to indoctrinate students in favor of the movement’s narrative.

In defending his course on a radio show recently, Professor J. Luke Wood told The Kevin Fox Show that because white people, and especially police officers and educators, harbor some level of racism against black people, his class is a necessary tool in combating bias.

“It’s necessary for us to radically transform the way that educators view their role in education. We are, again, preparing educators to see their classrooms as sites for civil resistance,” Wood said.

“During the 1960s, we had sit ins, we had demonstrations, we had vigils, we had protests. I want educators to see their own classrooms sites as avenues for them to engage in civil resistance through teaching,” Wood added.

According to an online description of the class, “Black Minds Matter” will address “the experiences and realities of Black boys and men in education.”

“The course draws parallels between the Black Lives Matter movement and the ways that Black minds are engaged in the classroom. The course will balance a discussion of issues facing Black male students as well as offer research-based strategies for improving their success,” it adds.

The course is slated to begin October 23, and will include an online portion that others across the nation can view, as well as a classroom portion for San Diego State students that will not be broadcast.

Some conservatives have called “Black Minds Matter” a poor use of taxpayer dollars.

“We should be spending public funds on courses that will actually prepare the next generation for meaningful jobs instead of teaching them how be victims,” said Jon Coupal, president of the Howard Jarvis Taxpayers Association, in a news release.

And Craig DeLuz, a black activist and trustee in the Robla School District in Sacramento, called Black Lives Matter a political movement “whose members have promoted segregation and violence against law enforcement.”

“Now we want to give them taxpayer dollars to train educators on how to indoctrinate our children?” DeLuz said in a news release. “That’s insane.”

But Wood told the San Diego Union Tribune that the course is not for indoctrination, rather it is to teach future education professors on how to confront oppression, adding “We’re organizing around Black Lives Matter’s guiding principles of loving engagement, empathy, values and restorative justice.”

Asked to weigh in, San Diego State College Republicans President Brandon Jones told The College Fix via email he has concerns with the course.

“Black Lives Matter is a group often associated with violence towards law enforcement and encourages havoc within our communities,” he said. “SDSU wants to not only fund these liberal speakers, but give college credit to the students who come and hear them speak.”