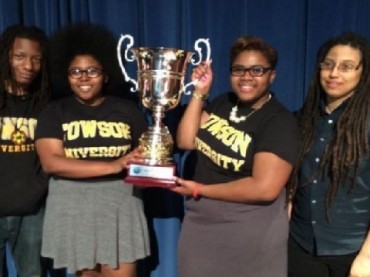 The 43-year-old Cross Examination Debate Association recently put out a press release proudly declaring that history was made at its most recent national tournament.

How did these impressive African-American Towson students rise to the challenge, beat 169 other collegiate teams, and take home the trophy – making history in the process?

To be frank, they cheated.

Members of the Towson University team engaged in a profanity laced tirade against their opponents on a topic completely different from the event’s given subject matter.

For those not familiar with college debate, the CEDA championship that Towson won was a “policy debate,” also referred to as cross-examination, in which two teams debate a proposed change to United States policy on a given issue.

This year’s debate question centered on the Presidential War Powers. But Towson, reports The Atlantic, took a different approach:

On March 24, 2014, at the Cross Examination Debate Association (CEDA) Championships at Indiana University, two Towson University students, Ameena Ruffin and Korey Johnson, became the first African-American women to win a national college debate tournament, for which the resolution asked whether the U.S. president’s war powers should be restricted.

Rather than address the resolution straight on, Ruffin and Johnson, along with other teams of African-Americans, attacked its premise. The more pressing issue, they argued, is how the U.S. government is at war with poor black communities.

And how did Towson plead its case? Here’s a censored excerpt provided by Pundit Press:

They say the n*****s always already qu***, that’s exactly the point! It means the impact is that the that the is the impact term, uh, to the afraid, uh, the, that it is a case term to the affirmative because, we, uh, we’re saying that qu*** bodies are not able to survive the necessarily means of the body. Uh, uh, the n***** is not able to survive.

Perhaps I am missing the finer nuances of college debate, but assuming I understand cross-examination debate correctly, this form of incoherent chaos is unacceptable, unprofessional, and in many ways, nonsensical.

To digress is one thing and to subvert the rules is another, but to digress, subvert, and win is something different altogether. I won’t lay the fault entirely at the feet of the Towson team for showing such blatant disregard for the guidelines, although they do deserve some criticism for resorting to a red herring argument to win the debate, if one can call it that. Yelling offensive profanities and throwing around the N-word takes debate-distraction tactics to a whole new level.

And in particular, what does it say when the first female African-American team to win the national debate did so in such a manner? To reward such misconduct defeats the purpose of organized debate.

But the judges allowed this to happen, perhaps to make history, perhaps to offer reparations for past mistakes, perhaps to assuage their “white guilt” or privilege. And this isn’t the first time they’ve made such a ruling.

“Fawning, sympathetic, liberal judges have of course rewarded such antics,” reports The Daily Caller. “According to The Atlantic, a similar thing happened last year, in 2013. The winning team — two black men from Emporia State University — quickly went off topic and instead chose to discuss how college debate tournaments promote the interest of straight, white, rich people.”

To commandeer a perfectly valid topic and replace it with your own is immature and improper in college debate. Towson should have been penalized for such a large digression from the topic at hand, and denied the victors the trophy as a result.

Instead, they were rewarded, perpetuating the soft bigotry that is the low expectations for the black community.