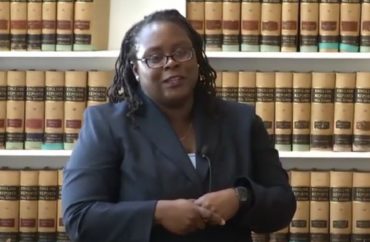 Selects its own dean for the role

Boston University’s law school recently announced its inaugural appointment for a professorship focused on critical race theory and antiracism, the first of its kind in the country.

The private university selected Angela Onwuachi-Willig (right), the law school dean, as the first Ryan Roth Gallo and Ernest J. Gallo Professor. The Gallos endowed the position with a $3 million gift, according to the Bostonia, the university’s alumni magazine.

“As we have seen for many years, and increasingly over the past summer, our country needs some new and innovative ideas about how to meet the ideal of equal justice for all,” Ryan Roth Gallo said in a statement to the alumni magazine. She endowed the critical race theory position with her husband, Ernest.

She said she wants the antiracism chair to bring “new ideas that will lead to changes that promote justice for all.”

The professor “is a longtime advocate for building structures in academia that can enable individuals or institutions to overcome or tackle racism,” the university said.

Her bio describes her as a “renowned legal scholar and expert in critical race theory, employment discrimination, and family law.”

The law school dean would not provide comment to The College Fix, instead forwarding requests to media relations staffers who declined to comment on the dean’s appointment.

“Unfortunately, given current demands on the dean’s schedule, we are unable to accommodate your request at this time,” Jeremy Thompson, a university spokesperson told The Fix via email.

The Fix had asked about what role the dean played in the professorship selection process, if other professors had applied and what the university hopes this new position accomplishes.

However, one ethics expert we spoke to said that appointing the dean of the law school to a law professorship is not uncommon.

“This process likely involved the donor and the university president,” Don Heider told The Fix via a phone interview. Heider is the executive director of the Markkula Center for Applied Ethics at Santa Clara University where he also is a professor of social ethics.

He said it is likely Onwuachi-Willig would have had no say in the process.

The awarding of endowed chairs to deans is “commonplace” in universities, Heider said. In fact, the endowment itself, $3 million, “isn’t enough to start a professorship from scratch.”

Heider said that he sees this as a way for the university to retain Dean Onwuachi-Willig and university officials likely made the decision without her involvement.

Onwuachi-Willig has been a vocal supporter of both the idea of systemic racism and anti-racism measures in the past including supporting critical race theory.

In the aftermath of the George Floyd killing in June, Willing said the laws and U.S. justice system are slanted against black individuals.

“There are also the myths that we tell ourselves in law that we’re supposed to be these completely neutral beings and that the law itself is completely neutral,” Onwuachi-Willig said in an interview with Slate.