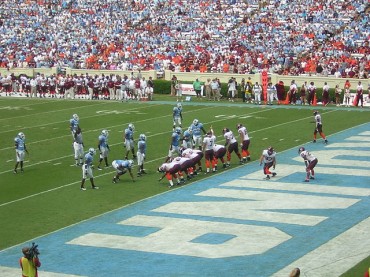 There is a shadow hanging over both college and professional football. As more evidence emerges about the serious long-term health risks of concussions, the safety of the game and the ethical implications of the game are increasingly being called into question. The controversy over the dangers of head injuries, currently raging at the professional level, could doom college football as well.

Rarely in history, if ever, has there been as big of a contradiction as the National Football League. The NFL is far and away the most popular sport in the country, and yet is constantly under fire. This phenomenon was captured perfectly in PBS Frontline’s documentary League of Denial, which aired last week after fifteen months of research and weeks of anticipation. The documentary has gotten a lot of attention. However, this is primarily due to an entity not officially affiliated with the project: The World Wide Leader in Sports, ESPN.

Originally, the documentary was a star-studded collaboration between the prestigious Frontline team and two of ESPN’s top investigative reporters. Brothers Steve Fainaru and Mark Fainaru-Wada are both highly respected and accomplished journalists – Steve won a Pulitzer Prize for International Reporting for his work during the Iraq War, while Mark is known for breaking the Barry Bonds/BALCO scandal.  (In addition, they wrote a book that is also titled League of Denial.) However, two months before the documentary aired ESPN mysteriously and – some would say suspiciously – pulled their names from the project.

Many speculated that it was because the documentary was highly critical of the NFL and they didn’t want to anger their lucrative business partner. Never mind the implications of compromising journalistic ethics; ESPN couldn’t afford to bite the hand that feeds.. ESPN vehemently denied anything of the sort. ESPN President John Skipper made the decision after seeing the trailer and feeling that it was “sensational.” The highly publicized split was a PR mess for ESPN, but, for PBS, it gave the project an unexpected boost. Suddenly, a group of people that probably wouldn’t have thought to tune into PBS were not only aware of the program, they were actively waiting for it. If League of Denial succeeded in scaring ESPN away from the project when it was that close to its end, then it must be fairly controversial and, more significantly, very damaging to the network’s golden goose.

So, just how damaging is it? It’s devastating, without a doubt. However, that is not to say that it was all that surprising or groundbreaking. The dangers of concussions and the risk of chronic traumatic encephalopathy (CTE) in football have been well documented. The NFL’s resistance to confirm the claims that there is a direct link between football and life debilitating diseases like CTE has also been quite public. Less widely known are the great lengths that the league went to to avoid dealing with the concussion crisis. League of Denial sheds light on the truth that the league has worked so hard to keep covered. And the truth is painful.

The documentary begins with hardnosed Hall of Fame center Mike Webster. During the seventies and the eighties, Webster was a force for the Pittsburgh Steelers, a team widely regarded as one of the toughest in football. Webster retired in 1990 with nine Pro Bowl selections and four Super Bowl championships. It was a glorious career that was followed by a harrowing epilogue. It lasted until he died in 2002 at the age of 50. In his post-playing life, Webster was tormented by depression and dementia. His struggles tore his family apart and left him homeless. After his death, neuropathologist Dr. Bennet Omalu examined his brain and diagnosed him with CTE. Webster was the first football player to ever be diagnosed with the brain disease.

By this point, the NFL was well aware that concussions were a problem. Then-commissioner of the league Paul Tagliabue created The Mild Traumatic Brain Injury committee way back in 1994. Notable players like Steve Young and Troy Aikman had suffered career-ending concussions. The media and the general public knew of the issue, too, but Tagliabue dismissed their concerns and said that their claims were a product of “pack journalism.” Dr. Omalu continued conducting research on the effects of the big hits that the NFL and its partners routinely glorified in stylized highlight packages. He published his research and found that the NFL was not only denying his claims, but also actively attempting to discredit him as a neuropathologist. Omalu, who is not a football fan, did not fully understand the implications of his findings. However, an NFL doctor memorably put it into perspective for him. “Bennett, do you know the implications of what you’re doing? If ten percent of mothers in this country would begin to perceive football as a dangerous sport, that is the end of football,” he said.

Other neuropathologists such as Ann McKee of Boston University have raised alarms as well. McKee has become the leading authority on brain injuries, particularly in football. Like Omalu before her, her findings have been contemptuously disputed by the NFL. She is responsible for one of the quotes that got under the skin of ESPN’s John Skipper. “I’m really wondering where this stops,” she told the Fainarus. “I’m really wondering if every single football player doesn’t have this.” Some have asserted that McKee doesn’t have a big enough sample size to say things like that. But the fact that she has diagnosed CTE in the brains of 45 out of the 46 football players that she has examined is pretty alarming. That she found it in an eighteen-year old high school player is even worse. The program is also packed with heartbreaking anecdotes from friends, widows, sons and daughters of NFL players that suffered greatly before dying too young – and, tragically, sometimes by their own hand.

The end of League of Denial focuses on the recent lawsuit between 4,500 former players and the NFL over concussions and other health issues that were the result of playing football in the league. However, a large chunk of the plaintiffs were going to be cut out of the deal because it couldn’t be determined that their injuries were caused by playing in the NFL, as opposed to occurring in college or high school. As a result, the NFL settled with the former players for $765 million. It sounds like a lot of money, but it’s a drop in the bucket for an industry that netted $9.5 billion in revenue last year. Although many saw it as an insult to the struggling and debilitated ex-players, some took it as a moral victory, and a sign that the truth was finally being exposed. “The human body was not created or built to play football,” former Giants linebacker Harry Carson said,  “I think the NFL has given everybody 765 million reasons why you don’t want to play football.”

The quote might be a little bit over-dramatic, but Carson definitely has a point. If research continues to suggest that playing football is likely to cause brain damage, then less and less parents are going to let their kids play the game. The NFL, college football, high school and youth football—it all looks invincible right now. But the truth is football is America is a lot more vulnerable than most people realize. The league, and the general public, for that matter, can’t keep denying forever.

Football is big business–both at the professional and college level. It may be hard to imagine such a lucrative and popular enterprise ever disappearing. But what if former college players start winning hundred million dollar lawsuits against universities? How long then until colleges would be forced to shut their football programs down? We may soon find out.

So, if you’re a football fan and you aren’t troubled by the ethical implications of each weekend’s biggest hits, it may be wise to fully soak in and appreciate the privilege of watching football while you can. League of Denial gives us good reason to believe it isn’t going to be around forever.

Blake Baxter is a graduate of Eureka College.