Rogé Karma walked around the student activities fair his first year of college in 2015 searching for a club that would keep him informed and challenge him politically.

What he found was the University of Notre Dame’s College Democrats and College Republicans clubs, whose members both kind of laughed, Karma said, when he asked if they discussed and debated political issues.

No, he said, they told him that they mostly worked on campaigns. The College Republicans added that they go trap shooting together. 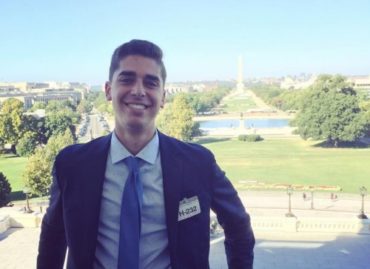 To Karma (pictured), the two groups seemed to operate under the assumption that everyone had already chosen a political side. But he hadn’t yet, and thought college would be the place to do it.

“You come to college, and the whole idea of a liberal arts education is to have your viewpoints challenged, to explore the questions and discover what you believe,” Karma said in a phone interview with The College Fix. “I was like, ‘Well this is weird. There’s no avenue for this?'”

So Karma created one.

That was a little over two years ago. Today, BridgeUSA is a national organization with a presence on campuses nationwide. Student leaders aim to foster discourse, empathy and intellectual growth.

“We at BridgeUSA believe partisanship itself is not the cause of the toxic culture of discourse on college campuses; in fact, partisanship, rightly understood, is the solution,” Karma, 22, wrote in an introduction to the organization. “The metaphor of the Bridge does not imply that we should meet at the center of the bridge. It means that I can cross over to your side of the bridge, you can cross over to mine, and only then can we not only fully understand where ‘the other’ is coming from but fully understand where we ourselves stand.”

BridgeUSA started with BridgeND, a single chapter on Notre Dame’s campus that Karma founded his second semester in December 2015. The organization’s first event packed a student ballroom with about 200 people, Karma said, and brought together the College Democrats, College Republicans, the Notre Dame Right to Life club and an environmental club for one large discussion.

Courtlyn Carpenter was a University of Colorado Boulder student looking to start a similar club on her campus. When she heard about BridgeND, she contacted Karma and proposed that the club could be made into a national organization.

The program expanded to include chapters at University of Colorado Boulder, UC Berkeley and Arizona State University as well as at Notre Dame.

BridgeUSA currently has clubs on 14 campuses, and is in the midst of developing on eight more.

“I had no idea how many students there are on campuses across the country that want something like this,” he said.

The organization garners financial support from club funding from each individual university and groups such as Future 500 and Heterodox Academy, a group of open-minded professors promoting viewpoint diversity that became a strategic partner with BridgeUSA in 2017.

“While we may have different areas of focus and different constituencies, BridgeUSA and Heterodox Academy share the same fundamental goal: to bring about the vision of a truly heterodox university,” Karma wrote in announcing the partnership.

Karma told The College Fix one of the goals of BridgeUSA is to get students out of “ideological echo chambers.” He’s noticed on many campuses that students tend to hang out and discuss politics with others of the same set of beliefs.

“You might as well be in a small-confined room yelling at the walls because exactly what you’re saying is just being reflected back at you,” Karma said. “Instead of having the experience where you’re being challenged and you’re hearing new views and new voices, you’re constantly just hearing your own voice reverberated back to you. We don’t find that healthy for people who are trying to discover their own beliefs. It’s a huge barrier to empathy and understanding.”

“It’s really easy when you never interact with the other side to paint them as ignorant or evil. That’s the barrier we’re trying to bridge, to use the metaphor.”

The budding group has already seen a bit of controversy. The UC Berkeley chapter invited firebrand Ann Coulter to speak in 2017, but the talk was cancelled after threats of violence against the event were lodged by extremist groups. Coulter had been invited as a counter-speaker to a pro-immigration talk the group hosted earlier, according to Pranav Jandhyala, who founded BridgeUSA at Berkeley.

“Our organization hopes to create a future in which our campus and our country are venues for free and fair political discussion and debate from all sides. We stand for the preservation of spaces where political ideas can be shared and challenged without fear of violence,” Jandhyala stated in 2017.

“We have so far been successful in hosting forum sessions and debates on a series of different issues. We’ve hosted five events in about two months. Many students were immediately interested in our mission, and our membership has expanded rapidly — we have 40 officers and about 150 to 200 members,” he added.

Join us now in Barrows 140 for our first debate of the year! #GunControl #BridgetheDivide pic.twitter.com/wf8hlyD1Nt

Karma, who graduated Notre Dame earlier this year and will work as a consultant in the fall, had many positive memories with his time at BridgeND.

Political speed dating, the first event of every year, was always one of his favorites. Students had five minutes to discuss an issue, and when a bell rang, they switched tables and topics.

He loved the meetings that continued hours past the proposed end time with a handful of students who wanted to continue the conversation.

His favorite feedback came from students who said they now felt politics was accessible and that they learned how to empathize with the other side.

“That I think is my favorite comment to hear,” he said. “It doesn’t mean you have to change your opinion. You realize that there are human beings on the other side of the issue who are trying to search for some good.”

Karma has taken a step down on day-to-day leadership in the organization, but he and Carpenter stay on the leadership team as senior advisors.

“The more people we can get involved in thinking about this, the better,” he said. “That’s hopefully what education is supposed to do.”