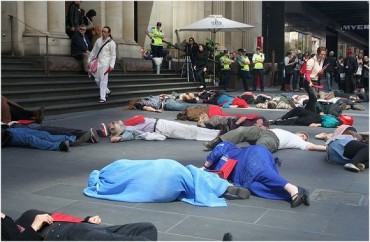 Approximately 75 students volunteered for a “die-in” at Brown University this past Friday to demand “the school to do more to honor Native Americans.”

The protest lasted exactly 52 minutes and 30 seconds to “signify the 523 years of indigenous resistance since Columbus.”

Friday was merely a “pre-demonstration” for yesterday, however, where students called for the university to change the name of its “Fall Weekend Holiday” to “Indigenous Peoples’ Day.”

The activism at Brown dovetails with a larger, national conversation about renaming Columbus Day to Indigenous Peoples Day — the reasoning being that Columbus didn’t actually discover America, and that in fact his arrival ushered in an era of slavery and genocide for Native Americans.

At Brown, however, the protest follows a controversy on campus over two op-eds published last week by The Brown Daily Herald, the student newspaper, that were denounced as racist by many students. One of the columns suggested that Native Americans should be thankful for Christopher Columbus, despite his enslaving thousands of natives in North America and sending dogs to hunt and attack people who resisted. The other op-ed argued that marginalization and oppression were linked to human biology.

The newspaper’s editors apologized, saying they’d “crossed the line.” Herald editors said the column about Columbus and Native Americans was not supposed to run, but it had been published due to an “internal error.”

Both the Herald editors’ apology and the statement from the student groups point out that Brown’s campus in Providence, Rhode Island, sits on land that used to belong to the Narragansett and Wampanoag nations.

Those at Brown, and many others for that matter, would do well to read this column by Mark Antonio Wright to gain just a little needed perspective. Here’s a taste:

Let us dispense with any pretense that the indigenous peoples of the Americas lived in a peaceful idyll in harmony with their neighbors and with nature, and that the advent of Columbus destroyed a noble paradise. The great civilizations of the Western Hemisphere were indeed advanced, and yet, like Europeans, Asians, and Africans, the American peoples used their technology to subjugate. Anyone familiar with the expansionist and warlike cultures of the Aztec and Inca Empires should know that the tables would have been turned had it been the New World that “discovered” the Old and possessed the power to conquer it. Human nature, tainted with original sin, is what it is and has been — of that we can be certain.

Europeans, beginning with Columbus, treated the Indians pitilessly — that should not be whitewashed or forgotten — but, in the same way, we should not ignore the genuine good that has come down to us as a result of the course of human events — namely, the space for a unique idea to grow and flourish: the self-government of a free people, with an ever-expanding idea of who can partake of that promise.

As the noted historian Arthur Schlesinger once said, “Revisionism redresses the balance up to a point; but, driven by Western guilt, it may verge on masochism.”

RELATED: Petition to replace Columbus Day with ‘Indigenous Peoples Day’ at U. of Oklahoma