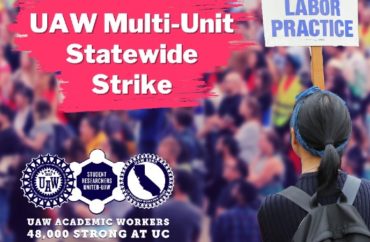 By Madison Hirneisen | The Center Square

Roughly 48,000 unionized University of California workers across all 10 campuses walked off the job Monday morning, saying that progress on proposals for fair compensation and workplace equity have been thwarted by UC’s “unlawful conduct.”

The workers voted to authorize a strike earlier this month, with 98% authorizing a multi-unit strike if necessary. The strike, which UAW said is the largest at any academic institution in U.S. history, comes roughly a month before final exams are set to begin.

“We are still far apart on many of the issues that will make UC a more equitable university,” Rafael Jaime, president of UAW 2865 that represents 19,000 of the 48,000 workers, said in a statement Monday. “We are hopeful that UC will cease its Unfair Labor Practices and bargain with us in good faith.”

The workers are demanding salary increases with annual cost of living adjustments, saying that many academic workers – who do the majority of teaching and research at UC schools – are having a hard time affording rent in areas with some of the nation’s highest housing costs.

“This affordability crisis is worsening for UC’s academic workers, threatening the institution’s long-term ability to recruit and retain a diverse workforce of the best emerging teachers and researchers,” a recent housing report by student employees, academic researchers and postdocs states.

Thirty-three state lawmakers wrote to UC President Michael Drake to urge the UC to come to the table and bargain with UAW in “good faith” to improve working conditions for academic workers.

The University of California issued a statement Monday saying it “continues to negotiate in good faith as we do everything possible to mitigate the impacts of any strike actions on our student learning.” The UC said it has engaged in 50 sessions with the four bargaining units represented by UAW.

“These employees make valuable contributions to the University’s teaching and research mission in both part-time and full-time roles, and we believe our offers of fair pay, quality health and family-friendly benefits, among other proposals, are fair, reasonable, and responsive to the union’s concerns,” The UC said, later adding that the university is “looking forward to continuing negotiations in good faith with the UAW and settling these contracts as quickly as possible so that important learning and vital research at our locations may continue.”