They are a small but vocal circle: feminist professors who believe Education Secretary Betsy DeVos* is right to propose a major overhaul of Title IX enforcement rules on sexual misconduct.

Meg Mott, a former court advocate for a battered women’s shelter and Title IX specialist at Vermont’s Marlboro College, writes in Inside Higher Ed that the proposed rules “assume that survivors still deserve to be treated as functional human beings.”

She faults the Obama administration’s nonbinding Title IX rules for depriving alleged victims “substantial decision-making processes” on whether to report their allegations and how to resolve their complaints against accused students. (Unlike DeVos’s proposal, Obama’s rules were never offered for public comment.)

A former paralegal who became troubled by “the erosion of due process” emerging in feminist jurisprudence in the 1980s, Mott writes that the Obama rules functionally imposed silence on victims who didn’t want their accusations to start a full-blown investigation:

By deputizing its entire work force as “responsible employees,” colleges were able to prove that they were taking sexual harassment and sexual misconduct seriously. But that policy required faculty members who taught sensitive material, such as feminist theory or literature, to alert their classes that any reference to an actual case of prohibited sexual behavior would need to be reported to the authorities.

DeVos’s proposal will “allow students to talk with others before deciding to initiate a complaint,” she notes, criticizing the “trauma-informed approach” of Obama’s rules.

Mott praises the proposal for letting schools “experiment with alternative forms of justice, such as mediation or restorative justice conferences,” which may offer “more healing” for some victims.

Obama’s rules treated victims as unable to “withstand the emotional distress of speaking with the accused,” even though research from other countries suggest the restorative-justice option is beneficial. 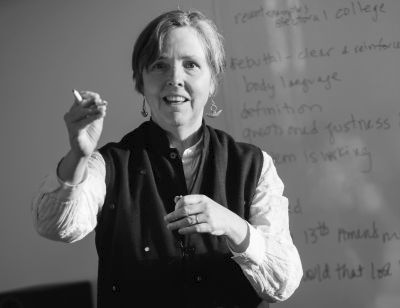 Contrary to the media-fueled argument that DeVos’s proposal lets colleges off the hook, Mott (left) argues that it actually forces them to clarify and enforce “collective norms.”

Obama’s rules were out of whack with workplace-harassment jurisprudence, which requires complainants to “communicate their discomfort” to the accused party before they can bring claims.

They told students to file complaints if they feel “demeaned, humiliated or scorned” by another person, leading “an entire generation of college students a sense that painful feelings outrival communication,” Mott writes:

Students need not communicate their unease or discomfort to the offending party. All that is necessary is mentioning the encounter in passing to a “responsible employee” and the Title IX apparatus will jump into gear.

By creating an objective standard for sexual harassment based on the reasonable-person standard, the DeVos proposal requires campuses to “adopt objective standards of decency, standards that will make it easier for aggrieved parties to voice their unease.”

While the proposal indeed helps accused students with cross-examination and other basic due process protections, it does “even more for survivors” by treating them as “capable decision makers.”