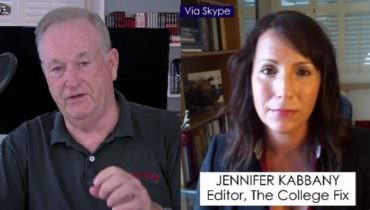 The discussion featured several stories recently published by The Fix, including “Professor penalized student for using word ‘man’ on his essay” and another on a trans-hippo visiting scholar at the University of Arizona.

Both O’Reilly and Kabbany voiced concern over the radical leftist bias emanating from college professors, and the spineless college administrators who do nothing to stem the tide.

The two also discussed ever-increasing campus craziness and how students respond to the madness.

The interview is part of O’Reilly’s nightly online newscast. Most of it is open to his subscribers, but a snippet was posted on Facebook.