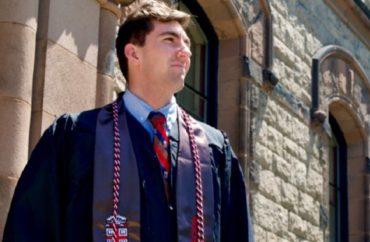 A graduate of Brown University wants to see his alma mater increase conservative representation on campus among the faculty and student body.

Brown Federalist Society founder Thomas Bickel made the argument recently in The Brown Daily Herald. He graduated this year with an undergraduate and is considering law school, according to an email he sent The College Fix.

“Brown’s chronic lack of countervailing viewpoints both within the student body and among faculty is unbecoming of an institution supposedly committed to diversity and inclusion,” he wrote in his essay.

Bickel (pictured) has three specific recommendations. First, the university should “[seek] out some esteemed conservative and libertarian faculty members to hire in order to diversify the teaching and curriculum offered by the College.” He gives the example of his boss Steven Calabresi, whom he works for as a research assistant, according to his LinkedIn. The Fed Soc advisor formerly taught at Brown University.

“Secondly, the College faculty ought to cooperate more with student organizations from across the political spectrum, such as the Brown Federalist Society,” he wrote. This would “help it achieve its mission of sponsoring fair, balanced and open campus debate with dissenting guest speakers.”

Finally, he wants to see the admissions office take steps that will likely bring in voices not commonly heard on the liberal campus.

Thirdly, the Office of Admission ought to make a transparent and concerted effort to increase outreach to applicant pools likely to contain top-caliber candidates from less mainstream educational backgrounds — who tend to be more conservative. Put differently, Brown should aim to compose an incoming class that is not only racially, socioeconomically and geographically diverse, but also ideologically diverse. This change would benefit the entire institution, but especially the liberal majority of students who are currently robbed of the valuable opportunity to have their arguments stress-tested (and ultimately fortified) by opposing perspectives.

“The implementation of these three changes would signal to the rest of the world that Brown truly embraces diversity and inclusion, and furthermore, that it is authentically committed to academic excellence,” he wrote. This “can only be maintained via fostering a vigorous debate culture.”