A lot of supposedly intelligent journalists and pundits think that transgender people came into existence on April 29, 2014, when the previous administration said it believed the word “sex” in Title IX applied to gender identity.

How else to explain their panicked reaction to a Sunday New York Times report that the Trump administration is considering defining sex by the “immutable biological traits” that make you male or female, at birth or even earlier?

David French calms down the panic at National Review, explaining why gender dysphoria “does not transform a man into a woman” and why the Trump proposal is simply following “conventional rules of statutory construction.”

Title IX has never defined the “existence” of people, contrary to the unhinged claims of anti-science gender activists and their media sycophants.

The Obama administration just pretended it could contort Title IX any way it wanted, regardless of the plain language of the statute and regulations that followed, without an act of Congress or even public comment through proper regulatory channels.

Democratic members of Congress had tried — and failed — to amend federal nondiscrimination statutes many times. So the Obama administration did it without Congress. Obama’s legendary “pen and phone” purported to change the law.

It’s obvious that political progressives at lower levels don’t believe they can change laws without passing new laws, which is why gender identity is a protected category in some jurisdictions, French notes: They changed laws. 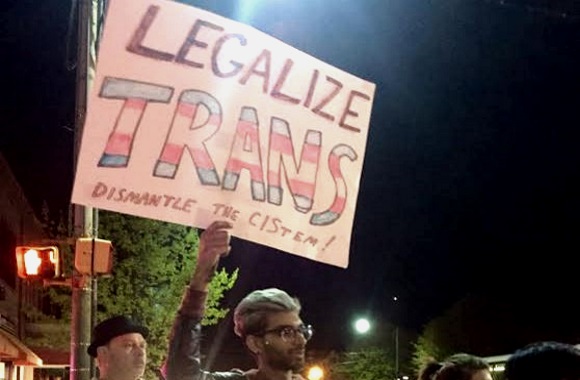 What is “truly puzzling” is claiming that reading a statute in its most reasonable light is “defining transgender people out of existence” and “dehumanizing them”:

In reality, the claim that you “dehumanize” a person if you hold contrary beliefs about sex and gender is a common, inflammatory rhetorical tactic that creates a false choice. Either you recognize a transgender person on their own terms, or you “deny their humanity.” You “deny their existence.”

As French concludes, defining sex as it obviously exists, in common sense and science, is “standing athwart a lawless redefinition of biological reality and quite appropriately yelling stop.”