So writes the “Cowboy Historian,” a scholar who maintains a blog and has tallied up the recent violence in a piece that lays waste to the narrative that “Trump’s election electrified racists, misogynists, and bigots, and represents no less than the return of Jim Crow America, or worse.” 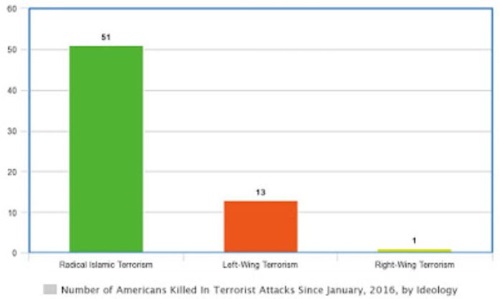 “My point here is not to claim that violent attacks by Trump supporters haven’t occurred, or to conflate the attacks of left-wing terrorists with all Democrats,” the historian writes. “Rather, my point is to illustrate the hate-filled narrative that undergirds the anti-Trump resistance.”

In an interview with The College Fix, the historian (who asked for anonymity because he does not have tenure), said the claim that Trump inspired a wave of right-wing violence in the last 18 months is a lie.

“What I am showing is that, on the one hand, Islamic terrorism continues to be the No. 1 threat, but a growing threat is left-wing terrorism,” he said.

In his blog post, he highlights not only the attacks against Trump supporters, but also various attacks associated with the Black Lives Matter and Black Power movements over the last 18 months, combining them under one “left-wing” category.

He argues that while left-leaning organizations mislabel certain attacks when calculating hate-crime statistics (mostly notably the New America think tank), when one combines anti-Trump attacks with those associated with anti-white attacks, the comparisons show which ideologies are truly the most dangerous.

So what does it all mean?

“I began forecasting a rise in left-wing violence just after the election, when regressive leftists so crassly started publicizing false Fascist/Nazi allegations, physically attacking conservatives on college and university campuses, and justifying violence against Trump and his supporters — all with very little pushback,” the historian writes. “Unfortunately, I was right. Violence has started to snowball. Barring a change in course, we are headed for some type of wider civil conflict. Deep down, everyone knows it.”