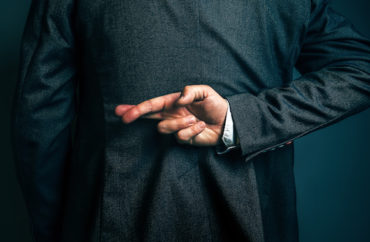 If you’ve ever been exposed to any of the strange and incomprehensible concepts that have come out of American higher education in the last few years—words like “intersectionality,” “cisgender,” “fat studies” and the like—then you’re familiar, even if you don’t know it, with the practice of “idea laundering.”

What is “idea laundering?” At The Wall Street Journal, Peter Boghossian explains how “politically engaged academicians have been developing concepts like [those named above] for more than 30 years.” They recently begun pushing them out into the mainstream culture, doing so by “passing off their ideas as knowledge.” These ideas, however, “aren’t scientific. By and large, they’re the musings of ideologues.”

Academics succeed in presenting their “musings” as facts by passing them through an extensive and outwardly legitimate peer-review process, Boghossian argues:

First, various academics have strong moral impulses about something. For example, they perceive negative attitudes about obesity in society, and they want to stop people from making the obese feel bad about their condition. In other words, they convince themselves that the clinical concept of obesity (a medical term) is merely a story we tell ourselves about fat (a descriptive term); it’s not true or false—in this particular case, it’s a story that exists within a social power dynamic that unjustly ascribes authority to medical knowledge.

Second, academics who share these sentiments start a peer-reviewed periodical such as Fat Studies—an actual academic journal. They organize Fat Studies like every other academic journal, with a board of directors, a codified submission process, special editions with guest editors, a pool of credentialed “experts” to vet submissions, and so on. The journal’s founders, allies and collaborators then publish articles in Fat Studies and “grow” their journal. Soon, other academics with similar beliefs submit papers, which are accepted or rejected. Ideas and moral impulses go in, knowledge comes out. Voilà!

Following this process, Boghossian writes, the academics “petition university libraries to carry the journal,” leading to financial solubility. Eventually there arises “an extensive canon of academic work—ideas, prejudice, opinion and moral impulses—that has been laundered into ‘knowledge’.”

Academics also strategically push back against any criticism of their bizarre ideologies by citing their own prior peer-reviewed research in the field, in what becomes a sort of self-reinforcing feedback loop.

Eventually these ideas trickle down to the student body in the form of lectures and coursework. Students “leave the academy believing they know things they do not know. They bring this ‘knowledge’ to their places of employment where, over time, laundered ideas and the terminology that accompanies them become normative.”