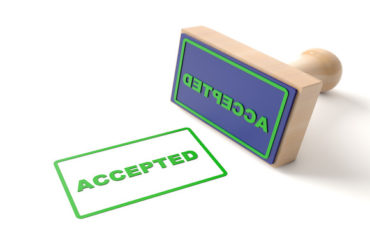 The coronavirus pandemic often seems to bring nothing but bad news, but for some college seniors, it has the upshot of a better chance of getting into their top-tier first-choice college or university.

“[I]t may be that high school seniors in the United States are suddenly more likely than ever to get the proverbial ‘fat envelopes’ or acceptance letters from their dream schools, as colleges send out final letters of admission in the coming weeks,” writes Matt Schifrin at Forbes.

The COVID-19 outbreak has temporarily changed how colleges court prospective students, Schifrin notes: campus tours and special “prospective student” festivals have all been put on hold until the virus recede. The result, he points out, is that schools “will be increasing the number of students they send acceptance emails to in an effort to ensure that they yield enough to fill their incoming classes.”

By way of example, Schifrin points out that last year, Bucknell University had to admit 100 wait-listed students after it failed to secure enough deposits from incoming freshmen. The pandemic will doubtlessly exacerbate this problem, one Bucknell official argues, claiming that the coronavirus “throws [college acceptance rates] very much into the food blender, you know—when it was on just a little bit of mince, it is now on full grind.”

For the highly selective institutions, like members of the Ivy League, acceptance rates and yields (the percent accepted who actually enroll) may not change significantly, in part because these rarefied schools have deep inexhaustible wait lists. However, many top schools enroll large numbers of international students, and now those prospects are questionable. As of March 20, 2020, the U.S. Department of State suspended all routine visa services, which would include student visas.

“The challenge is that things are changing so quickly that it’s impossible to predict what the status will be two and a half months from now,” says Christoph Guttentag, Dean of Undergraduate Admissions at Duke University, whose acceptance rate of 8% translated to a freshmen class of 1,744 last year, including about 10% from abroad. But Duke, which has a total foreign student population of 22%, according to the most recent data from the Department of Education, ought to have no problem reaching into its waiting list should the 170 or so incoming freshmen it will likely admit from abroad be unable to journey to its Durham, North Carolina, campus this fall.

The pandemic “has exacerbated the desperation of some institutions to enroll their class,” one analyst says, predicting that schools over the summer will “compete for promising applicants, and even solicit transfers from the rolls of promising students they previously rejected on early decision.”