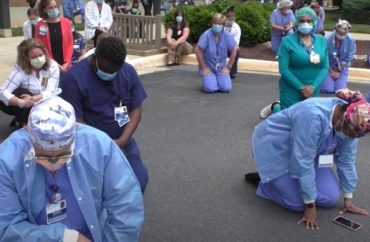 A psychiatry professor recently warned her medical colleagues that their activism on racial issues could undermine trust in the medical field as long as they continue to tie medicine and racism together.

Psychiatrist Sally Satel, a visiting professor at Columbia University’s med school and a resident scholar at the American Enterprise Institute, argues that doctors “should not pretend that they are experts in how society should be run.”

She acknowledged that doctors should certainly be free to participate in political activism as private citizens, but that they run into trouble when they try to “contend with broad social issues that impact health in a less direct manner,” Satel wrote.

Such activism “takes physicians into realms where they have no expertise” when doctors try to tie their medical career into fighting racism “and thus risks eroding public trust in the medical profession.”

She writes in Persuasion:

…matters can get murky when physicians promote particular policies to achieve their goals. The American Medical Association would politicize the profession if it advocated, for instance, a single payer health system.

I fully support increasing diversity within the medical profession and addressing the social conditions that directly impact health, then. But I am deeply concerned about the third demand that activists are now making of my field: that we should advocate for causes that are, at best, only remotely connected with health—and which physicians have no special expertise to address.

Satel points out recent developments such as the new “anti-racist” curriculum at Stanford medical school and the push by a medical school advocacy group to require “unconscious bias training.”

She asks her colleagues to consider the implications of trying to merge anti-racism with medical training:

Will the politicized ‘anti-racist’ classroom be able to summon the neutrality needed to impart scholarly findings of rigorous medical sociology? Will instructors encourage civil debate and viewpoint diversity? How will they treat students who disagree that our political economy is ‘predicated on devaluing Black labor, demeaning Black bodies, and denying Black humanity’? And how can we effectively promote the importance of self-care—following a diet, exercising, taking prescribed medications regularly—under a regime that sees patients as being almost exclusively at the mercy of social forces?

Doctors “should not spend their time in medical school being told how to re-order, for example, an unfair economic system,” Satel argued. “Our empathy for victims of unfairness ought to reach that far—but our expertise doesn’t and can’t.”

“Racism is indeed a poison. But physicians are not trained to extract it from the body politic,” Satel said.

“And if doctors stretch their authority too far, it will break,” she concluded.