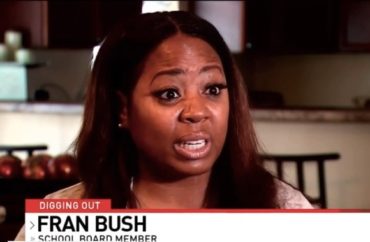 ‘Holding our kids pawns to their demands’

Fran Bush says her school wasn’t just a classroom. It was a “safe place” when she was stuck in the foster care system, and she was saved from “abuse” by a teacher.

She wants Metro Nashville Public Schools to be a safe place for the 25,000 students who are currently marked “truant” during virtual “learning,” if you can even call it that.

Her fellow school board members, district director and white-led teachers union, however, aren’t interested in teaching children in the most effective way – in person.

The mother of five is fighting a lonely crusade against powerful forces, as portrayed in a WZTV segment on Bush’s battle:

“We are in a crisis, it’s not about putting a [Band-Aid] on anything anymore, it’s about basically surgery, we are going to have to figure out how we can piece things back together so they can have a future,” Bush said.

Bush can’t stand it. She is naming those she feels are responsible: Her fellow school board members, Dr. [Adrian] Battle and the teacher’s union president Amanda Kail.

“It’s been about the teachers and holding our kids pawns to their demands, after I saw her [Facebook] post I was really angry at the continuation of her mission to keep our students out of school,” said Bush.

Here’s Kail’s Facebook post, where the white union president claims the fight to give minority children a good education is a nefarious plot by Bush and “mostly wealthy, mostly white parents.” (Wealthy white parents don’t have to rely on public schools for their children’s education.)

According to the news station, Bush has become so prolific from her battles that Gov. Bill Lee called her: “Who can remember a governor calling a local school board member, ever?”

Bush’s children have either graduated or are about to graduate college, following in her footsteps as the first person in her family to complete college.

“Where I came from, I want to make sure I can pay it forward and that’s what I was taught by my teachers, by people who care about me, I will never forget where I was in that dark space,” she said.