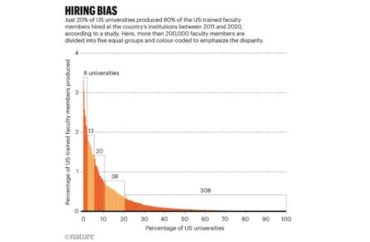 American universities hire most tenure-track professors from just 20 percent of schools, mostly prestigious institutions such as Harvard and UC Berkeley, according to a study published in the academic journal Nature on September 21.

“Just 20% of PhD-granting institutions in the United States supplied 80% of tenure-track faculty members to institutions across the country between 2011 and 2020,” Nature reported in an article on the study.

Even more, more than one in eight professors trained in the United States earned their PhDs from UC Berkeley, Harvard, University of Michigan, Stanford, or University of Wisconsin-Madison, according to the open-source study. Just five to 23 percent of faculty are employed at universities more prestigious than the school where they earned their doctorate.

The analysis surveyed tenured or tenure-track professors employed between 2011 and 2020 at 368 PhD-granting institutions in the United States. More than 92 percent of faculty hold doctoral degrees, according to the open-source study.

Academics quoted in the Nature article said it confirms a culture of elitism and exclusion in academia:

“It’s not surprising, but it is jarring” to see these data, says Leslie Gonzales, a social scientist who studies higher education at Michigan State University in East Lansing. “There’s so much brilliant work and training of brilliant scholars that’s happening outside of this tiny sliver” of institutions, including at [Historically Black Colleges and Universities] and [Hispanic-serving institutions] — and it’s being overlooked, she says.

This picture of elitism is bolstered by a study published last month in Nature Human Behaviour, showing that almost 25% of faculty members in the United States have at least one parent with a PhD (in the general population, less than 1% of people have a parent with a PhD). That’s significant because parents with advanced degrees tend to have higher socio-economic status than do those without such education, so upper-class families are contributing heavily to the PhD pipeline, says Aaron Clauset, a computer scientist at CU Boulder and co-author of both papers.

Together, the studies portray an academic system in which most faculty members are trained at a few universities, and academic researchers generally come from families with similar backgrounds, setting up a cycle of sameness. “Is the system a meritocracy?” asks Daniel Larremore, a computational scientist at CU Boulder who is a co-author of both papers. “In peer review, no; in the spread of ideas, no; and in faculty hiring, surely no.”

Read the article and the full study.