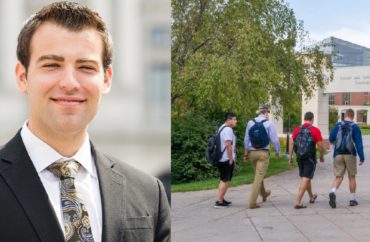 A conservative commentator said legislators should not be afraid to use political power to rein in the abuses of public universities.

“The structural rot underlying higher education’s problems has been decades in the making, and reforming the system is daunting,” Andrew Cuff (pictured) wrote at RealClearEducation. “But a narrow focus on public institutions under the legal control of state legislatures could restore some sanity, at least in red and purple states.”

He said the enrollment drop on campuses tied to university shutdowns over COVID fears is further proof that legislators must not be afraid to step in hold schools accountable. Academic freedom is not a get-out-jail-free card to avoid political oversight, Cuff said.

“State legislators must not be dissuaded by disingenuous appeals to “freedom” – they must grab the reins and give a hard yank before it’s too late,” he wrote. “They should use the law to protect students’ free speech in and out of the classroom.”

He provided some examples.

They should arrogate the authority to appoint top university officials and install chancellors and presidents – preferably without degrees from today’s stultified departments of education – who are responsive to voters. They should use the power of the purse to limit hardline Maoism in curriculum and campus ordinances. They should make it possible for students themselves to decide how they protect themselves from COVID. In states where the legislature is constitutionally limited as to how it can intervene in college governance, legislators should exercise their rightful authority to amend the state constitution – and then reform higher education. They should stop at nothing.

These actions can “revive enrollment and boost student satisfaction,” he said.