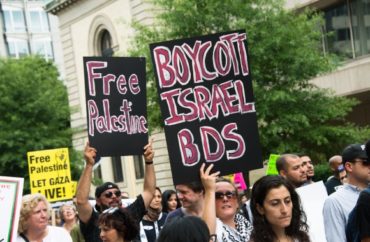 A Jewish student at the University of Chicago recently criticized her representatives for showing an “embarrassing lack of knowledge” about the conflict in Israel, as well as for siding with Palestine.

A May 21 statement from the private university’s Undergraduate Student Government “denies the legitimacy of Israel as a nation and calls for the destruction of the only Jewish state,” Rachel Ostergren said in an essay in The Chicago Thinker.

The student government said that “from the river to the sea, USG supports a Palestine that is free.” This is a version of the popular phrase used by Palestinian terrorist groups such as Hamas and the PLO that refers to an elimination of the state of Israel.

She criticized the demand for Boycott, Divestment and Sanctions.

“Within the statement, SG explicitly denounces Zionism, challenging the belief that Jewish people have a right to self-determination in a Jewish State,” Ostergren said. “SG also expresses support for the movement BDS, whose mission is to economically destroy Israel through boycotts, divestments, and sanctions.”

Chicago’s incoming Undergraduate Student Government was under no obligation to release a statement about the Israeli-Palestinian conflict. SG’s representatives don’t actually have the authority to do anything substantive about long-term conflict in the Middle East or to formally change university policy. And, in releasing its statement, SG fails to properly represent the student body it was elected to represent.

“As a typical leftist student organization, SG self-righteously says that ‘silence is violence,’ and purports to feel a moral obligation to comment on issues it does not understand,” Ostergren said.