Some scholars have wondered if unions in the education sphere will hew closer to their members’ practical interests and less toward left-wing crusades because of the Supreme Court’s Janus ruling.

But for major teachers’ unions, the fear of losing “agency fees” from non-member employees does not appear to exist.

Both the National Education Association and American Federation of Teachers held their national conventions this month, which produced pledges to blacklist businesses whose owners believe in biblical sexuality and work toward massive public funding of, well, everything.

You’d have a hard time telling what most of this has to do with education, or how it will help the NEA stop its anticipated loss of 300,000 members or AFT convince even half its members to pay full dues.

Frederick Hess, director of education-policy studies at the American Enterprise Institute, and his colleague Grant Addison tick through the approved policies from the two conventions in National Review.

The NEA plans to “post a list of known individuals with businesses who are committed to refusing services to same-sex couples and/or LGBTQ individuals” and spread it throughout friendly far-left groups like the Southern Poverty Law Center. 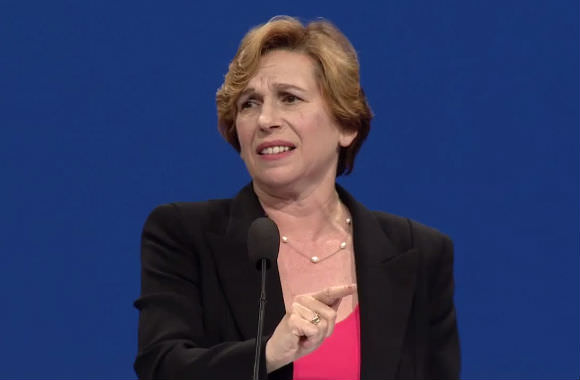 AFT and President Randi Weingarten (left) simply want more of your taxpayer dollars for everything: universal healthcare, free tuition for every public college and university, universal and free full-day child care, twice as much per-pupil spending for low-income K-12 districts, and on and on.

Political candidates who want its endorsement will be judged by their alignment with the union’s pie-in-the-sky agenda. Fittingly, the politicians at the AFT convention already fit its bill, including Sens. Elizabeth Warren and Bernie Sanders.

Hess and Addision say they had planned to “scour the tea leaves for subtle hints as to how the unions might woo reluctant members, especially the hefty share who take issue with the leftist bent that has characterized the unions in recent decades: “It turns out that the tea leaves weren’t that hard to read, after all.”