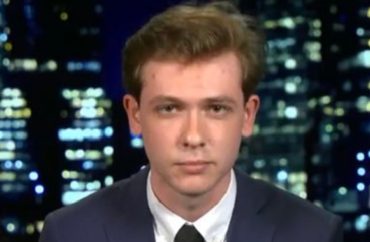 A conservative University of Chicago student who “lived in a single-mother household in a small Tennessee town for most of [his] life” recently argued his school is biased against “middle-class white kids.”

Daniel Schmidt (pictured) has detailed his concerns in interviews and on Twitter and wrote about them in an essay for The Epoch Times titled “Welcome to the Elite.”

To be more specific, I mean middle-class students of European ancestry. I’ve met several middle-class Hispanic students who appeared white but marked Hispanic on their college applications, earning them a sizable increase in their acceptance rate thanks to affirmative action.

He shared his thoughts on why this might be true:

It has become increasingly clear to me that as a white male, your only real way to get into an elite university, barring any absolutely extraordinary circumstances, is to either be low-income or extremely wealthy. The more low-income students a university has, the more impressive its statistics look to its board of trustees and donors. And the wealthiest of the wealthiest almost certainly went to our nation’s top boarding schools, signaling to these universities that they’re already well-positioned to become the next President Barack Obama or McKinsey CEO.

Schmidt thinks this is because elite universities want the prestige that comes with having successful alumni.

“These schools don’t want to miss out on claiming the next president or Wall Street hotshot,” he wrote.

“If diversity is truly a concern of these elite universities and students, why is the absence of middle-class white Americans never lamented?” he asked. “If anything, it seems like it’s celebrated. After all, the racist, Trump-supporting Middle Americans have no right to study in the same hallowed libraries as the children of Martha’s Vineyard’s aristocracy,” he wrote.