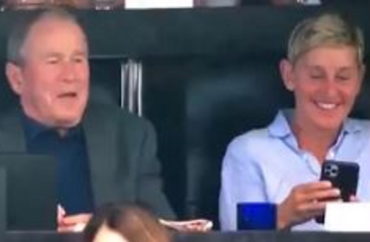 “When I say ‘be kind to one another,’ I don’t mean only the people that think the same way that you do. I mean be kind to everyone”

Fans of Ellen DeGeneres know she often encourages her massive audience to “be kind to one another.” She even has an entire line dedicated to the expression. More recently, she was able to use it in defense of her sharing a laugh with former President George W. Bush during Sunday’s Dallas Cowboys and Green Bay Packers football game.

In response to a short video of the two sitting side by side and having a — wait for it — friendly conversation, the so-called Cancel Culture responded in outrage against the beloved comedian and talk show host, who is married to actress Portia de Rossi, saying she betrayed the LGBTQ community for speaking to the former commander in chief.

DeGeneres made light of the situation on “The Ellen DeGeneres Show” Tuesday, calling for more tolerance and kindness while sharing “the whole story” with her viewers.

“During the game, they showed a shot of me and George laughing together. And so, people were upset,” DeGeneres said. “They thought, ‘Why is this gay Hollywood liberal sitting next to a conservative Republican president?’ ”

“Here’s the thing,” she added. “I’m friends with George Bush. In fact, I’m friends with a lot of people who don’t share the same beliefs that I have. We’re all different and I think that we’ve forgotten that that’s OK.”

DeGeneres continued: “When I say ‘be kind to one another,’ I don’t mean only the people that think the same way that you do. I mean be kind to everyone. Doesn’t matter.” …

DeGeneres concluded her message by reminding Bush: “You owe me $6 for the nachos.”

DeGeneres’ reaction to the outrage mob is commendable. A dash of humor and kindness can go a long way toward diffusing the anger and vitriol seen on campuses today — rage that is mainly coming from the indignant left.

Yes, that was me at the Cowboys game with George W. Bush over the weekend. Here’s the whole story. pic.twitter.com/AYiwY5gTIS

And the fact is — she’s right. Both sides, regardless of disagreements, should be kind to one another. It’s a message that dates back millennia — treat others the same way you want them to treat you. We need to see more of this on college campuses.