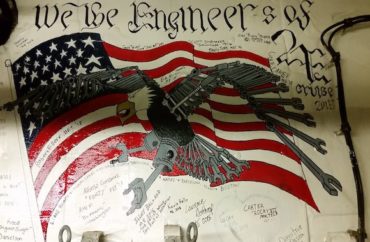 Officials at California State University Maritime provoked outrage when they announced plans to erase murals on its training ship painted over the years by students. The backlash was so fierce officials have delayed a final decision and will form a committee to determine the future of the murals.

The murals are deeply personal and “deciding to whitewash over the murals for the sake of political correctness” is an insult and disservice to student and alumni, an online petition against the removal of the murals states.

“Each summer our students sail on our training ship the Training Ship Golden Bear to destinations around the world, and it has been a rich maritime tradition to paint a mural on the walls of the ship commemorating the adventure,” Karl Rodvik, a current senior, told The College Fix. “Then students in their respective division sign their mural.”

Graduate Jacob Eaton told The Fix the murals usually contain references to events from the cruise, traditional maritime art styles, inside jokes, and are signed by everyone in the division.

“Over the years, almost 200 of the murals have been painted around the ship,” he said.

The controversy began due to the fact that “a small handful of students and faculty have found a few of the murals to be offensive, particularly in their depiction of women,” Eaton said.

Student Mason Garifi told The Fix that he received an email on Feb. 19 telling him to take photos of all the murals before the school’s spring break, which begins March 4. Two days later, a letter from the president of the school, Thomas Cropper, revealed the school’s decision and explained the apparent rationale for reconsidering the role of the murals.

“Over the last several years, there have been a number of faculty, staff, cadets and campus visitors who have offered comment to me regarding murals painted onboard TSGB. Some folks were proud, some were amused, some were concerned, some were troubled by certain drawings. Having viewed them myself, and trying to better understand all points of view, I can see how different people could view each of these murals with the diversity of opinion that has emerged,” the president stated.

“Serious concerns by all of these groups related to objectification, in particular, images that are vulgar, offensive and/or objectify women,” the letter continued. “So, we have a situation where we want to encourage continued expression of the cadet experience at sea, create an environment of genuine teamwork that does not insult, belittle or objectify women, and still preserve the works of folk-art by our alumni.”

The letter then lays out potential steps, including the complete archival of the murals via photograph that would be digitally archived. However, the next step involves creating a “fresh start — literally, a clean slate,” raising questions as to whether or not all of the murals would be painted over, or just the ones found offensive.

The letter continued that the commanding officer of the Golden Bear will develop a policy determining who can paint a mural, and how long the mural can stay visible before it is archived and painted over to make room for new ones.

The letter concludes with the president stating he would insist and ensure that “whatever expressions of art that are sanctioned by the academy, such as these murals, reflect the level of professionalism that is expected by our profession.”

The decision to wipe the slate clean was walked back in subsequent days.

Robert King, director of public affairs and communications for the university, told The Fix that the spring break deadline for archiving the murals will not be met, and the decision concerning the future of the murals will be made by a committee of “cadets, staff, faculty and alumni.”

“The murals represent many fond memories and a rich school tradition,” Eaton added. “As a student, I felt so much school pride and artistic expression emanating from murals of years past, and was so proud to help create one for my own division. This same profundity is felt by the majority of current and former students of [California Maritime Academy]. However the administration seems poised to destroy all of that to appease a small and vocal minority.”

The potential for the murals’ erasure drew the ire of a petition that’s garnered more than 2,145 signatures and counting.

“The murals on the TSGB are a collection of memorable art pieces created by talented students over the course of nearly three decades. Removal of them is a decimation of school history and art,” the petition reads. “The reason for their removal is due to a small minority of the faculty finding them offensive.”

“Deciding to whitewash over the murals for the sake of political correctness, without the input or consent of any students, highlights the disconnect between the administration and student body, and ultimately is a tragic loss of art,” it concludes, before asking for support to “stop this travesty.” 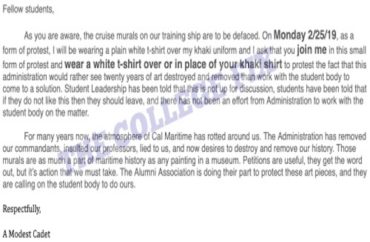 A recent protest also occurred on campus in the form of students wearing a white t-shirt in place of the standard khaki shirt. An email from an anonymous account was circulated to organize the protest, and Garifi said that a “good number” of students participated without receiving any backlash from faculty for being out of uniform.

Future of the murals to be decided by committee

“The tradition of painting murals on the training cruise has long been carried out without a written policy in place,” King explained.

“A committee of cadets, staff, faculty, and alumni are going to convene to develop and recommend a policy governing the creation, location, and preservation of the murals taking into account their location in a shared space that functions essentially as both a classroom, learning laboratory, and residence hall for many of our students.”

“I don’t know the timeline for the committee’s work, and I wouldn’t guess at the outcome, but there’s no way (given the challenges of taking well-lit photos in the belly of ship) that the work of photographing existing murals will be complete by spring break,” he continued.

A Facebook gallery of some of the murals is available here.

CMA friends, feel free to share these. I'm sorry some of them are blurry or not taken them in the best lighting. I took…