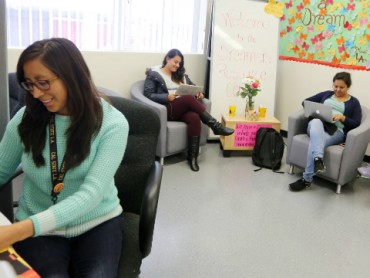 ‘Dreamers’ need a space ‘where they can feel safe’

Illegal immigrants in California are already eligible for state financial aid for college. Some public schools are now spending taxpayer money to help these students get money from other sources, even as legal students fight for sparse resources.

California State University-Los Angeles received a $1.6 million endowment late last month to fund the Dreamers Resource Center, which the school bills as a space that provides “academic guidance, referral assistance and other support” for so-called dreamers, or students whose parents brought them to the U.S. illegally.

It’s just the latest Cal State campus to christen a center dedicated to students without documentation: Fullerton was the first a year ago and Long Beach came two months ago.

The Northridge campus has one “in the works,” and legislation pending in the Legislature would help create more centers across the Cal State system and in community colleges, according to the Los Angeles Times.

The CSU-LA gift will help the school underwrite staff costs and maintain a dedicated space for the center, which was created in October. It helps undocumented students with things like scholarship deadlines and applying for federal work authorization, the school said.

Erika Glazer, the philanthropist whose $1.6 million donation followed her earlier pledges of $700,000 for illegal immigrants, said in CSU-LA’s release that she hopes the center “will be obsolete in a few years and the funds can go toward other programs” at the school.

CSU-LA “has a long history in facilitating the academic success of special student populations” such as low-income students, Nancy Wada-McKee, assistant vice president for student affairs, told The College Fix in an email. She said the school also serves more than 700 veterans through their own resource center.

Technically, the Dreamers center is open to all students, Wada-McKee said, although it focuses on helping undocumented students. Favoring one group over everyone else?

The 2011 California Dream Act also granted access to financial aid to so-called AB 540 students who attend a college or university in California.

In fall 2014, about 850 CSU-LA students met the requirements for in-state tuition under AB 540, the Times said.

The Long Beach Press Telegram reported a year ago that around 6,400 undocumented students were enrolled at Cal State’s 23 campuses.

CSU-Long Beach’s own “Dream Success Center,” not quite three months old, has already run into opposition from some students who think it’s a waste of valuable resource for a school that’s stretched thin.

The Fix previously reported on lobbying against the center by CSU-LB College Republicans Chairman Nestor Moto, Jr., who said the money that went into creating it could have been used to shrink overcrowded classes or offer more counselors for all students.

“We have 10 advising centers and that is who the money should have been allocated to,” not one special student population, Moto told The Fix in March.

The Daily 49er reported that the renovation for Long Beach’s center cost $16 million, and ongoing costs – including a full-time coordinator for the 650 undocumented students – run to $80,000 a year.

Besides the CSU-LA pledge from philanthropist Glazer, University of California President Janet Napolitano has set aside $5 million in non-state funds for undocumented students and resource centers.

Jose Guevara, a CSU-LA center adviser and political science major who previously received a Glazer scholarship, told the Times that it was “important that [Dreamers] have a space where they can feel safe.”

Glazer is not the only multimillionaire philanthropist putting undocumented students ahead of other college students.

The new money – up to $25,000 each for 1,200 students at TheDream.us partner colleges – comes on top of $10 million each the duo previously donated. They want to spur other philanthropists to donate $30 million for another 5,000 scholarships, the organization said.

TheDream.us teamed up with the City University of New York last year to give scholarships to undocumented students who have already filed for temporary legal status.