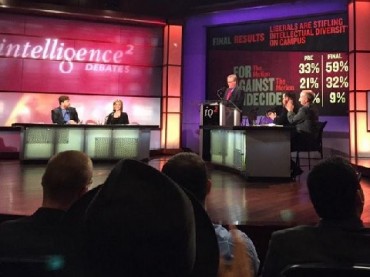 WASHINGTON, D.C. – After a 90-minute campus debate Tuesday over whether liberals stifle intellectual diversity on college campuses, nearly six in 10 members of the audience agreed – they do.

That according to a vote of the audience taken after the “Intelligence Squared Debate” at George Washington University on the topic of whether “liberals are stifling intellectual diversity on campus.”

Greg Lukianoff, president of the Foundation for Individual Rights in Education, along with Fox News contributor and USA Today columnist Kirsten Powers, were able to convince 59 percent of those in attendance that there is a pervasive liberal intolerance of different views on campuses, an atmosphere that hinders free speech and debate.

That was an increase of 26 percent of the audience, as a survey prior to the debate found that only 33 percent supported the notion that liberals suppress intellectual diversity on campuses. Arguing the other side – that there is plenty of tolerance and intellectual diversity on campuses – were Angus Johnston, founder of the website StudentActivism.net and a history professor at the City University of New York, and Jeremy Mayer, an associate professor in the School of Policy, Government, and International Affairs at George Mason University.

“Take any hot topic in America today, and I can point you to examples of students and faculty members getting in trouble for being on the conservative side of the issue,” Lukianoff said.

Lukianoff cited several examples of such intolerance, including a Northern Kentucky University professor leading her students to vandalize the display of a pro-life student group, which consisted of dozens of white crosses to protest Roe v. Wade.

He also pointed to a pro-life display at Dartmouth College, where a student ran over a series of tiny American flags with his car because he found them offensive.

Powers brought up several examples of her own. “Our opponents are telling you that liberals are not stifling intellectual diversity on campuses,” Powers said. “Sadly, this could not be further from the truth.”

She recalled an instance at Marquette University, where a political science professor named John McAdams blogged about an exchange where a Marquette philosophy instructor told a student that debating gay marriage in class was “not appropriate” and “homophobic.”

Marquette suspended the professor who blogged about the incident and banned him from campus during the suspension.

For their part, Johnston and Mayer argued that these instances on college campuses are isolated, high-profile examples that are not representative of what’s happening on the majority of campuses. Students are, in fact, exercising their right to free speech by protesting, they said.

“The American campus today as it has been in the past is a site of robust and passionate debate,” Johnston said. “That is true not only because it is a place of learning but also because it is a haven for young people.”

Johnston added that where free speech is curtailed on campuses is overwhelmingly by administrators. They are not motivated by ideology, he said, but by “opposition to disruptiveness and clamor.”

Mayer contended that while 61 percent identify as liberal, 85 percent of faculty members said that ideology played no role in determining tenure in their department.

He also pointed to the Catholic University of America, which he said has an “official policy” of not allowing speakers on campus who support the pro-choice stance.

The two sides did find common ground over campus speech codes, however.

“I think a speech code just creates an extremely chilling environment,” she added.

“I think speech codes are wrong,” he said. “And I wouldn’t support them.”

But Mayer added that he doesn’t think they are part of a “liberal ideology crushing conservatism.”

EDITOR’S NOTE: The article has been amended from its original version to delete a suggestion that Lukianoff or Powers view themselves as conservatives.