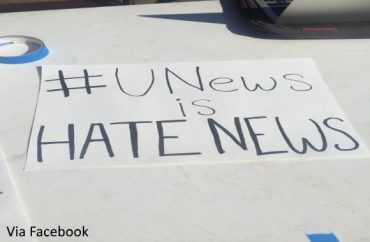 Saint Louis University launched an investigation after a student filed a bias report over an editorial in the Catholic university’s student newspaper that discussed societal views toward deviant sexual orientations.

It asked “what makes zoophilia so wrong but same-sex marriage normal?”

The unsigned editorial also led to a student petition that calls for The University News to enter into “a restorative justice process,” demanding staff resignations, diversity training and the creation of a queer column.

“Gender and Sexual Identification: Right and Wrong?” – which was retracted a few days after it was published – questioned how society views individuals holding “unusual attractions” such as zoophilia (attraction to animals), bestiality (sexual relations with animals) and pedophilia.

“Over the past few decades, Americans have grown more supportive of same-sex marriage, but in the same period, rights movements for other people with unusual attractions have not intensified,” reads the Feb. 16 editorial.

The editorial wondered if society should judge pedophiles so severely given its tolerance for other sexual attractions. It also touched on the controversy of Rachel Dolezal, a former NAACP chapter leader who identifies as African American but is Caucasian.

“When looking at this issue, how should we view her claim? Minorities receive financial benefits that white people do not, so this issue holds extra weight,” the editorial said of Dolezal’s situation.

The bias report was received Feb. 19 from a student, who alleged the editorial “contained messages that were incendiary, harmful and offensive to individuals on the basis of their sexual orientation, gender identity/expression, and racial identity,” according to the university’s incident report log.

SLU’s Office of the Special Assistant to the President for Diversity and Community Engagement is overseeing an ongoing investigation regarding the complaint, according to the log, which was last updated Feb. 27.

The university didn’t respond to a request for comment on the status of investigation and when it might be completed.

Sorry for being ‘mostly privileged, white, straight and cisgender’

The U. News responded to criticism of the editorial after Free to be, a campus feminist group, said on Facebook that it didn’t “condone the queerphobia, transphobia, or sub-mediocre analyses of race present in this article.”

The group, which didn’t respond to a request for comment, also referred to the campus newspaper as “hate news.”

The U. News editorial board promptly issued an apology to “anyone who was hurt by the offensive nature of the piece” and released a retraction expressing regret for publishing the editorial.

Examples “used to illustrate our points were poorly chosen, and the language and tone of the piece was highly inappropriate” and the editorial never meant to “equate same-sex attraction with pedophilia or bestiality,” the retraction said.

“But more importantly, our biggest and most egregious offense is the lack of inclusion of any LGBTQ+ individuals in this discussion,” the retraction adds. “We realize that a group of mostly privileged, white, straight and cisgender college kids are not the best people to lead such a conversation.”

Editor-in-Chief Kyle Smith told The College Fix that his newspaper is aware of the bias probe.

“At this moment, we are unsure of what stage of the process administration is in, but we are willing to fully cooperate in any investigation or remedy that may result from the bias incident,” Smith said in email. Furthermore, an online petition spearheaded by a SLU student calls on The U. News to “begin to reconcile their failure through a restorative justice process.”

The petition demands the resignation of Smith and the opinion editor, a diverse search committee to replace them, staff diversity training and the creation of a queer column.

Smith said the newspaper is open to the sought “restorative justice process.”

The newspaper participated in a LGBT “Safe Zone” training by assistant director of campus ministry Patrick Cousins on March 7. Smith said: “It was a thoroughly educational and insightful experience for everyone in attendance, and I’m glad we had the opportunity to learn from it.”

“For now, we are trying to give the communities affected by our piece the time and space they have requested to heal but our eventual goal has been to establish some sort of facilitated dialogue with those that we’ve harmed,” Smith said.

In the wake of the controversy, the newspaper also pledged to collaborate “with more knowledgeable SLU organizations on how to best increase minority representation in the newspaper, as well as an increase of coverage about LGBTQ+ events and news” at the Catholic university.

Meanwhile, a group called “Billikens Against Bias” recently uploaded photos on its Facebook page of students holding signs on campus that read “#UNewsisHateNews.”

CORRECTION: The original article misstated the timing of the “Safe Zone” training that The University News agreed to host for its staff. It took place March 7. The article has been amended accordingly.